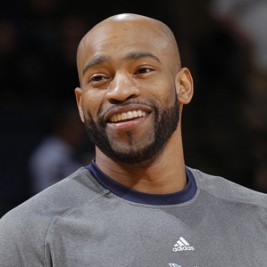 Businesses, Non-profit organizations, event planners and companies across the country have worked closely with our booking agents to hire Vince Carter for a speaking engagements, guest appearances, product endorsements and corporate events. Many of those same clients have continued to turn to our speakers bureau as we can easily align Vince Carter’s availability with their upcoming seminar, gala, annual conference, corporate function, and grand opening. Our close relationship with Vince Carter’s booking agent and management team further enables us to provide inquiring clients with Vince Carter’s speaking fee and appearance cost.

If your goal is to hire Vince Carter to be your next keynote speaker or to be the next brand ambassador our celebrity speakers bureau can assist. If Vince Carter’s booking fee is outside your companies budget or your unable to align with his appearance availability, our booking agents can provide you a list of talent that aligns with your event theme, budget and event date.

Vince Carter is an American professional basketball player who currently plays for the Memphis Grizzlies of the National Basketball Association. He is 6'6" and can play both shooting guard and small forward.

A high school McDonald's All-American, Carter played three years at the University of North Carolina. While there, he twice reached the Final Four of the NCAA Tournament before being selected as the fifth overall pick in the 1998 NBA draft by the Golden State Warriors, who traded him to the Toronto Raptors. He won the 1999 NBA Rookie of the Year Award and won the Slam Dunk Contest at the 2000 NBA All-Star Weekend. That summer, he represented the United States in the Summer Olympics, winning a gold medal.

He quickly emerged as a league star, entertaining crowds with his leaping ability and slam dunks, earning him nicknames such as "Vinsanity", "Air Canada", and "Half-Man, Half-Amazing".

An eight-time NBA All-Star, Carter joined Hall of Famers Julius Erving and Michael Jordan as the only players to lead the NBA All-Star Game fan voting more than three times. Carter scored his 20,000th career point in 2011, becoming the 37th player in league history to do so.

Off the court, Carter established his Embassy of Hope Foundation, assisting children and their families in Florida, New Jersey and Toronto. He was recognized in 2000 as Child Advocate of the Year by the Children's Home Society, and received the Florida Governor's Points of Light award in 2007 for his philanthropy in his home state.