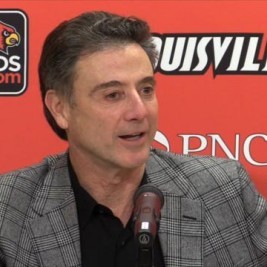 Businesses, Non-profit organizations, event planners and companies across the country have worked closely with our booking agents to hire Rick Pitino for a speaking engagements, guest appearances, product endorsements and corporate events. Many of those same clients have continued to turn to our speakers bureau as we can easily align Rick Pitino’s availability with their upcoming seminar, gala, annual conference, corporate function, and grand opening. Our close relationship with Rick Pitino’s booking agent and management team further enables us to provide inquiring clients with Rick Pitino’s speaking fee and appearance cost.

If your goal is to hire Rick Pitino to be your next keynote speaker or to be the next brand ambassador our celebrity speakers bureau can assist. If Rick Pitino’s booking fee is outside your companies budget or your unable to align with his appearance availability, our booking agents can provide you a list of talent that aligns with your event theme, budget and event date.

Rick Pitino, the first coach in NCAA history to take three different teams to the NCAA Final Four, was inducted into the Naismith Memorial Basketball Hall of Fame in 2013. A 2006 inductee to the New York City Hall of Fame, Pitino has the second-highest winning percentage in NCAA Tournament games among active coaches, winning 75 percent of his games in the post-season event with a 50-17 record in 19 tournament appearances.

Pitino is one of only two coaches (along with North Carolina's Roy Williams) in NCAA history to have led two different schools to at least three Final Fours each. He is one of only four coaches (also Jim Boeheim, Mike Krzyzewski and Dean Smith) ever to guide a school to the Final Four in four separate decades. Pitino is one of a select group of eight coaches who have taken teams from four different schools to the NCAA Tournament. He is one of five coaches all-time who have reached the Final Four on at least seven occasions. Pitino is known for getting his players to believe in themselves, instilling the desire to succeed and driving his players to overachieve. His former players speak of their coach's caring nature beyond their basketball skills. As evident, by twenty-nine of his former assistants or players have become collegiate head coaches.

For three and a half years, Pitino served as president and head coach of the NBA's Boston Celtics. With the Celtics, he took over a team that had posted a franchise-worst 15-67 record before his arrival. He quickly made an impact helping provide culture to a talented, but young team; improving the Celtics' victory total by 21 games in his first season.

He guided Kentucky to three NCAA Final Four appearances in his last five years at Kentucky, winning the 1996 NCAA Championship and reaching the national title game in 1997. In eight seasons with the Wildcats, he amassed a 219-50 record (.814) while winning two league crowns and an impressive 17-1 record in the Southeastern Conference Tournament. Pitino was only 25 years old when he accepted his first head coaching job at Boston University in 1978. He produced a 91-51 record in five years there, departing as the most successful coach in BU history. In his final season there, he guided the Terriers to their first NCAA Tournament appearance in 24 years. He was twice named New
England Coach of the Year (1979, 1983).

Pitino left Boston U. to become an assistant coach for the New York Knicks from 1983-85, where he worked with hall of fame coach Hubie Brown. It was a team he would return to lead as its head coach in two seasons. He was head coach at Providence College for two seasons (1985-87), producing a 42-23 record there. He guided the Friars to an NCAA Tournament appearance in 1986 and an improbable trip to the NCAA Final Four in 1987, winning the regional title in Freedom Hall.

Before his stint at Kentucky, Pitino served as head coach of the New York Knicks for two seasons. In his initial year there in 1987-88, the Knicks improved by 14 victories and made the NBA Playoffs for the first time in four seasons. The Knicks won 52 games in 1988-89 and swept the Philadelphia 76ers in the first round of the NBA Playoffs. Aside from his hoops prowess, Pitino has achieved success off the court as well in such realms as broadcasting, publishing, motivational speaking and horse racing. He is an accomplished author, producing such books as the best sellers "Success Is A Choice" and "Lead to Succeed," as well as his latest offering "The One-Day Contract."