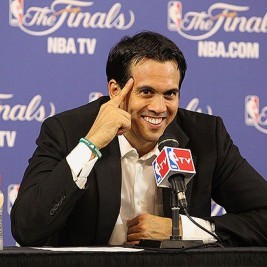 Businesses, Non-profit organizations, event planners and companies across the country have worked closely with our booking agents to hire Erik Spoelstra for a speaking engagements, guest appearances, product endorsements and corporate events. Many of those same clients have continued to turn to our speakers bureau as we can easily align Erik Spoelstra’s availability with their upcoming seminar, gala, annual conference, corporate function, and grand opening. Our close relationship with Erik Spoelstra’s booking agent and management team further enables us to provide inquiring clients with Erik Spoelstra’s speaking fee and appearance cost.

If your goal is to hire Erik Spoelstra to be your next keynote speaker or to be the next brand ambassador our celebrity speakers bureau can assist. If Erik Spoelstra’s booking fee is outside your companies budget or your unable to align with his appearance availability, our booking agents can provide you a list of talent that aligns with your event theme, budget and event date.

From 2001 to 2008, he served as assistant coach and director of scouting for the team. He has coached the Heat to 194 regular-season wins and four playoff appearances, including trips to the 2011 and 2012 NBA Finals, in his first four seasons.

In April 2008, Spoelstra was named successor to Pat Riley as head coach of the Miami Heat. In naming Spoelstra as head coach, Riley said: "This game is now about younger coaches who are technologically skilled, innovative, and bring fresh new ideas. That's what we feel we are getting with Erik Spoelstra. He's a man that was born to coach."[9] Riley also noted: "A lot of players want the discipline; they will play [hard] for Spoelstra, because they respect him."

Spoelstra coached the Heat to the NBA Finals in 2011 where they lost 4–2 against the Dallas Mavericks.