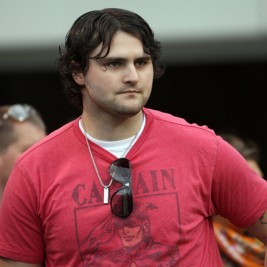 Businesses, Non-profit organizations, event planners and companies across the country have worked closely with our booking agents to hire Erik Ainge for a speaking engagements, guest appearances, product endorsements and corporate events. Many of those same clients have continued to turn to our speakers bureau as we can easily align Erik Ainge’s availability with their upcoming seminar, gala, annual conference, corporate function, and grand opening. Our close relationship with Erik Ainge’s booking agent and management team further enables us to provide inquiring clients with Erik Ainge’s speaking fee and appearance cost.

If your goal is to hire Erik Ainge to be your next keynote speaker or to be the next brand ambassador our celebrity speakers bureau can assist. If Erik Ainge’s booking fee is outside your companies budget or your unable to align with his appearance availability, our booking agents can provide you a list of talent that aligns with your event theme, budget and event date.

Ainge was selected in the fifth round (162nd overall) of the 2008 NFL Draft by the New York Jets. In May 2008, Ainge underwent surgery on the little finger on his throwing hand. On July 16, he signed a four-year, $1.87 million contract with a $165,000 signing bonus. On November 21, 2008, Ainge was suspended four games by the NFL for violating the league's policy on steroids and related substances. Ainge, already on injured reserve and out for the season with a foot injury, was not allowed to be with the team or visit the team facility during the suspension. He was able to rejoin the team December 15, 2008, following the New York Jets' game against Buffalo. Ainge was expected to compete with Kellen Clemens and Kevin O'Connell for the final quarterback roster spot on the team in 2010. It was later announced that Ainge had entered "a drug treatment/rehab facility for 'recreational issues'," marking the second time he had violated the NFL's substance abuse policy. Ainge made an announcement to The Associated Press on June 23, 2011, stating that he would retire from the NFL due to injuries sustained to his throwing shoulder and right foot.