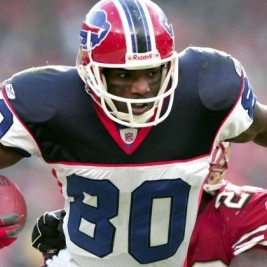 Businesses, Non-profit organizations, event planners and companies across the country have worked closely with our booking agents to hire Eric Moulds for a speaking engagements, guest appearances, product endorsements and corporate events. Many of those same clients have continued to turn to our speakers bureau as we can easily align Eric Moulds’s availability with their upcoming seminar, gala, annual conference, corporate function, and grand opening. Our close relationship with Eric Moulds’s booking agent and management team further enables us to provide inquiring clients with Eric Moulds’s speaking fee and appearance cost.

If your goal is to hire Eric Moulds to be your next keynote speaker or to be the next brand ambassador our celebrity speakers bureau can assist. If Eric Moulds’s booking fee is outside your companies budget or your unable to align with his appearance availability, our booking agents can provide you a list of talent that aligns with your event theme, budget and event date.

Eric Moulds was born July 17, 1973 in Lucedale, Mississippi and is a former American football wide receiver in the National Football League. He was drafted by the Buffalo Bills 24th overall in the 1996 NFL Draft. He played college football at Mississippi State.

In 2009, Moulds was one of three receivers named to the Buffalo Bills 50th Anniversary All-Time Team.  Moulds was the Bills' first round draft pick (24th overall) in 1996. For his first two seasons, Moulds was stuck on the depth chart behind receivers Andre Reed and Quinn Early.

In 2002, Moulds became the first player in Bills history to log 100 receptions.

In the playoffs Moulds had NFL playoff record 240 receiving yards against the Miami Dolphins, though he notably lost a fumble on the Bills' first play, a 65-yard pass from Flutie. Buffalo lost 24-17.

On April 4, 2006, Moulds was traded to the Houston Texans, in exchange for their fifth round draft pick in the 2006 NFL Draft. Moulds was released from the Texans after the 2006 season. After his release, Moulds criticized then-Texans quarterback David Carr, saying "the quarterback has to show that he can carry the team."

The Tennessee Titans signed Moulds on July 25, 2007, and at the beginning of the season he had earned a starting position. Moulds played in all 16 games in 2007, having the 4th most receptions on his team, 2nd most by wide receivers, with 32 catches for 342 yards. The Titans released Moulds after the 2007 season.