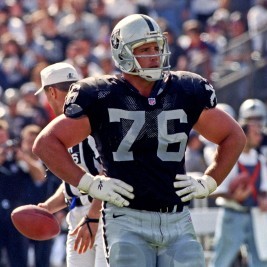 If your goal is to hire Steve Wisniewski to be your next keynote speaker or to be the next brand ambassador our celebrity speakers bureau can assist. If Steve Wisniewski’s booking fee is outside your companies budget or your unable to align with his appearance availability, our booking agents can provide you a list of talent that aligns with your event theme, budget and event date.

Steve Wisniewski nicknamed "The Wiz" is a former offensive guard who played 13 seasons with the Oakland/Los Angeles Raiders and later served as the team's assistant offensive line coach. He was drafted by the Dallas Cowboys in the second round of the 1989 NFL Draft. His rights were traded to the Raiders that same draft. He played college football at Penn State.

He would play all of his 13 seasons in the league with the Raiders. "Wiz" became the standout Guard of the 1990s and made the Pro Bowl 8 times in his career tying him at the time of his retirement with Art Shell, Howie Long, and Tim Brown (Who would later surpass him) for most by a Raider. He was also named to the NFL 1990s All-Decade Team and was a first team All-Pro twice. Missed only 2 regular season starts in 13 year career due to injury.