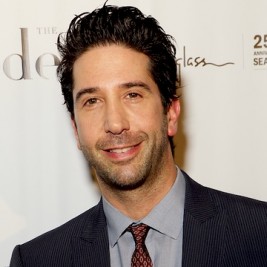 If your goal is to hire David Schwimmer to be your next keynote speaker or to be the next brand ambassador our celebrity speakers bureau can assist. If David Schwimmer’s booking fee is outside your companies budget or your unable to align with his appearance availability, our booking agents can provide you a list of talent that aligns with your event theme, budget and event date.

David Schwimmer became a TV star with his role as "Ross" on the sitcom "Friends".

After a drama instructor encouraged Schwimmer to attend a summer program in acting at Northwestern University in Chicago, he pursued and obtained a B.S. degree in speech/theater at the school.

After his graduation in 1988, David, along with seven other graduates, founded the Lookingglass Theater Company in Chicago consisting of an ensemble of actors, directors, and writers.

His stage-acting credits include "West," "Of One Blood," "The Odyssey," "In the Eye of the Beholder" and "The Master and Margarita." As a stage director he has been involved in "The Jungle," earning six Joseph Awards; "The Serpent"; and "Alice in Wonderland."

Schwimmer made his debut as a television-series regular in 1993 on the comedy "Monty." He has had recurring roles in a few other TV series and has hosted Montreal's "13th Annual Just For Laughs Festival." Schwimmer will demonstrate his skills on camera as well as behind the scenes, as he directs and stars in his next movie, Dogwater.