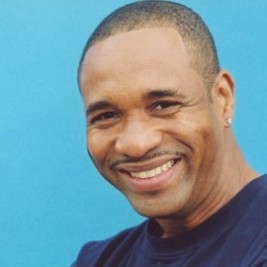 If your goal is to hire Darryl Van Leer to be your next keynote speaker or to be the next brand ambassador our celebrity speakers bureau can assist. If Darryl Van Leer’s booking fee is outside your companies budget or your unable to align with his appearance availability, our booking agents can provide you a list of talent that aligns with your event theme, budget and event date.

Darryl Van Leer's one-man show, "Power on Earth", has earned high praise from critics and audiences alike. Termed "emotionally riveting," by Daily Variety, the show features vivid portrayals of some of history's most important and influential African American figures. Written, directed, and performed by Van Leer, the show includes a startlingly accurate portrayal of Dr. Martin Luther King Jr., the dramatic courtroom eloquence of Thurgood Marshall, and the fiery conviction of Malcolm X, as well as Nat Turner, leader of the largest slave revolt in history, separatist Marcus Garvey, slave turned abolitionist and orator Frederick Douglass, and blues greats Robert Johnson and Muddy Waters. His performance then entitled "The Gallows to the Gavel" earned him a nomination for the 1996 NAACP Theatre Award.

Van Leer says of the show: "There are certain things in the production that help me become each one of these men. It's already laid out in my mind, and I become the men instantaneously. The characterizations have been developed over the years as I have traveled the college circuit, trying to bring my message of social upliftment to campuses across the country."

To date, he has performed "Power on Earth" for audiences totaling well over 100,000 people. The National Association of Campus Activities recognized his work in 1994 as "Best Performance" and Campus Activities Today has recognized him as "Performer of the Year". He maintains an annual performance schedule of more than 60 colleges and universities.

Today, he enjoys a successful and varied career in film and television as a featured performer. Most recently, he appeared in First Time, a Nickelodeon Movie of the Week co-starring John Amos. His other recent film work includes roles in Steel Chariots, an acclaimed Fox Movie of the Week, and in an HBO original movie, The Second Civil War, co-starring James Earl Jones and Beau Bridges.

His other television and motion picture appearances include the NBC-TV movie, Witness to an Execution, and the HBO film Up Against the Wall. He also appeared in the major motion picture A League of Their Own, co-starring Geena Davis and Tom Hanks, and in nationally aired TV commercials. Van Leer has performed extensively in local stage productions, and his theatrical repertoire also includes stand-up comedy. He has traveled the comedy circuit, appearing in such hot spots as The Comic Strip and Catch a Rising Star in New York.