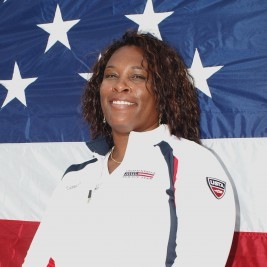 Businesses, Non-profit organizations, event planners and companies across the country have worked closely with our booking agents to hire Zina Garrison for a speaking engagements, guest appearances, product endorsements and corporate events. Many of those same clients have continued to turn to our speakers bureau as we can easily align Zina Garrison’s availability with their upcoming seminar, gala, annual conference, corporate function, and grand opening. Our close relationship with Zina Garrison’s booking agent and management team further enables us to provide inquiring clients with Zina Garrison’s speaking fee and appearance cost.

If your goal is to hire Zina Garrison to be your next keynote speaker or to be the next brand ambassador our celebrity speakers bureau can assist. If Zina Garrison’s booking fee is outside your companies budget or your unable to align with his appearance availability, our booking agents can provide you a list of talent that aligns with your event theme, budget and event date.

The highlight of Garrison's career took place at Wimbledon in 1990 where she defeated the French Open champion Monica Seles in the quarterfinals and the Wimbledon champion and World No. 1 Steffi Graf in the semifinals. During her career, Zina won 14 top-level singles titles and 20 doubles titles.

Garrison turned professional in 1982, enjoying notable success on-court. During her first full year on tour, she reached the Australian Open semifinals and finished 1983 ranked as the World No. 10.  In 1984, she won her first top-level singles titles at the European Indoor Championships. In 1985, Zina was a Wimbledon semifinalist and in 1986 she won her first tour doubles at the Canadian Open.

At the Australian Open of 1987, Garrison won the mixed doubles and finished runner-up in the women's doubles. At the 1988 Olympic Games, Garrison partnered up with Pam Shriver, winning the women's doubles Gold Medal for the United States. Shriver was later defeated by Garrison in the quarterfinals of the singles event, earning Zina a Bronze Medal. In 1989, Garrison defeated Evert in the quarterfinals of the US Open. Garrison finished 1989 ranked as World No. 4 in singles.

At the age of ten, Zina Garrison started playing tennis. She entered her first tournament at the age of 12 and two years later she won the national girls' 18s title. In 1981, Zina won the Wimbledon and the US Open junior titles, ranking as the World No. 1 junior player. In 1996, she retired from the professional tour. She has since worked as a TV commentator and has maintained active roles in the community as well as in tennis.