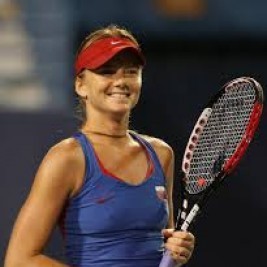 If your goal is to hire Daniela Hantuchova to be your next keynote speaker or to be the next brand ambassador our celebrity speakers bureau can assist. If Daniela Hantuchova’s booking fee is outside your companies budget or your unable to align with his appearance availability, our booking agents can provide you a list of talent that aligns with your event theme, budget and event date.

Daniela Hantuchová is a Slovak tennis player. She turned professional in 1999 and had her breakthrough year in 2002, when she won her first WTA tournament, the Indian Wells Masters, defeating Martina Hingis in the final and becoming the lowest-ranked player to ever win the tournament. She also reached the quarterfinals of that year's Wimbledon Championship and US Open, ending the year in the top 10. She was also part of the Slovak team that won the 2002 Fed Cup and the 2005 Hopman Cup.

Hantuchová reached her highest ranking, fifth, in January 2003, after reaching the quarterfinals of the Australian Open. She has gone on to win a further six WTA tournaments, including the Indian Wells Masters for a second time in 2007 and most recently the 2015 Thailand Open. She also reached the semifinals of the Australian Open in 2008, the furthest she has progressed in a Grand Slam. She is the most successful Slovak tennis player of all time and became only the 37th woman in the Open Era to reach 500 career wins when she beat Laura Robson in the second round of the Aegon Classic in June 2013.

Since December 2014, Hantuchová has been coached by Carlos Rodríguez. She was ranked 17 in 2012 but experienced a drop in her ranking due to injuries. Her WTA Tour mentor in the "Partners for Success" program was Martina Navrátilová, who was her doubles partner for a brief period in early 2005.