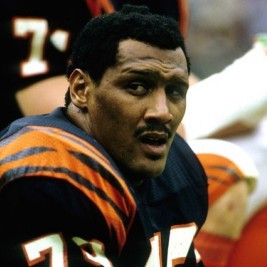 Businesses, Non-profit organizations, event planners and companies across the country have worked closely with our booking agents to hire Ross Browner for a speaking engagements, guest appearances, product endorsements and corporate events. Many of those same clients have continued to turn to our speakers bureau as we can easily align Ross Browner’s availability with their upcoming seminar, gala, annual conference, corporate function, and grand opening. Our close relationship with Ross Browner’s booking agent and management team further enables us to provide inquiring clients with Ross Browner’s speaking fee and appearance cost.

If your goal is to hire Ross Browner to be your next keynote speaker or to be the next brand ambassador our celebrity speakers bureau can assist. If Ross Browner’s booking fee is outside your companies budget or your unable to align with his appearance availability, our booking agents can provide you a list of talent that aligns with your event theme, budget and event date.

Ross Browner was born March 22, 1954, Warren, Ohio and is a former defensive end who played ten seasons in the NFL, mainly for the Cincinnati Bengals. In 1985 he jumped to the Houston Gamblers of the USFL, but returned the same season to the Bengals. He is the father of current Pittsburgh Steelers offensive tackle Max Starks, and brother of Joey Browner and Keith Browner. During his senior year in college, he was featured on the cover of Sports Illustrated with the subheading of "Notre Dame's Peerless Ross Browner." Ross Browner was named to the Cincinnati Bengals 40th Anniversary Team in 2007.

Ross Browner was one of the most decorated defensive players in the history of College Footbal. He was a four-year starter at defensive end in 1973 and 1975-77. He was a unanimous All-America his junior and senior seasons of 1976 and 1977. In 1976 he won the Outland trophy as the nation's best interior or defensive lineman also in 1976 United Press International named him Lineman of the Year. He won the Lombardi Trophy as the nation's best lineman and the Maxwell Award as the nation's best player and again won the UPI Lineman of the Year Award, the only player ever to win it twice. In the decade of the 1970s, Browner was the only lineman who won the Maxwell. In 1977 he also placed fifth in voting for the Heisman Trophy.