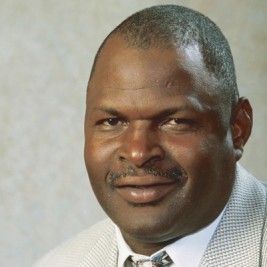 Businesses, Non-profit organizations, event planners and companies across the country have worked closely with our booking agents to hire Rickey Jackson for a speaking engagements, guest appearances, product endorsements and corporate events. Many of those same clients have continued to turn to our speakers bureau as we can easily align Rickey Jackson’s availability with their upcoming seminar, gala, annual conference, corporate function, and grand opening. Our close relationship with Rickey Jackson’s booking agent and management team further enables us to provide inquiring clients with Rickey Jackson’s speaking fee and appearance cost.

If your goal is to hire Rickey Jackson to be your next keynote speaker or to be the next brand ambassador our celebrity speakers bureau can assist. If Rickey Jackson’s booking fee is outside your companies budget or your unable to align with his appearance availability, our booking agents can provide you a list of talent that aligns with your event theme, budget and event date.

He finished his career on the NFL top 10 all-time sacks list. He has been inducted into the New Orleans Saints Hall of Fame.

The only flaw that Rickey Jackson had on a football field was that he wasn't twins. Off the field, was a different story. The man so admired for his effort, strength and perserverance on the field, was an admittedly weak man off of it.

He destructed from a devastating combination of fame, money, opportunity, idolatry, and adultery.

His sins were broad and deep.

He admits that he had his pick of pretty girls while clubbing, and pick he did.

"I did things that I know were wrong," he said.

He's gone through a pair of marriages, but compared to his father, he's only in the minor leagues.

Rickey Jackson said his father was a "roller." A "roller" being someone who lives a fast lifestyle of fame, money and women " going from woman to woman, only worrying about self gratification.

One of Jackson's brothers was born just days before him, by a woman who was not his mother, in the same hospital where he would be born just days later.

"Me and him were born a couple of days apart. We look just alike," said Jackson. "I should have learned from him (my father)."

"I was a foolish roller," he admits today.

But Jackson claims that his lesson came late. Now, he claims he is a born-again Christian.

His passions, he says, are now golf and the Lord.

He said he combines them both on Mondays, playing with his church's bishops and studying the Bible with them afterward.

He owned a club in West Palm Beach " Club 57. Every temptation was at his fingertips then, until, he said, he found the Lord.

"I was sitting in the back of my club with my bodyguards to make sure no one messed with me and God just told me that if I don't do this, 'I'm not going to keep you around.'"

Jackson said shortly thereafter he gave up the club, the lifestyle and found in the Lord the only one that he was more anxious to please than himself.

"God delivered me from everything I asked him to deliver me from. I don't run girls anymore. He washed a lot from my blood. I don't gamble, don't smoke, don't drink."

Jackson's mother forbade him from contact with his biological father. Her death and his rebirth allowed him to forgive"if not forget.

"I hadn't had dinner with him in my 47 years and I got saved and now we go to church together."

Rickey acknowledges that there are too many single parent kids, and he realizes his contribution to the problem. But, he now says he relishes the chance to guide the sons of fathers who have also strayed.

"If you don't have your daddy, you got me," he said. "If you have an issue or problem, you're going to see Rickey Jackson."

But Jackson's problems may not all be behind him. He admits to having one unresolved child support case and one local woman, having seen Eyewitness Sports promote the story with Jackson, called to say that he was considerably behind in his child support payments for their son.

Records from local courts and the State of Louisiana show Jackson does owe more than $130,000 to the woman and their son.