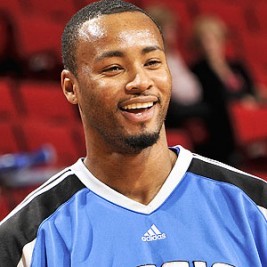 Businesses, Non-profit organizations, event planners and companies across the country have worked closely with our booking agents to hire Rashard Lewis for a speaking engagements, guest appearances, product endorsements and corporate events. Many of those same clients have continued to turn to our speakers bureau as we can easily align Rashard Lewis’s availability with their upcoming seminar, gala, annual conference, corporate function, and grand opening. Our close relationship with Rashard Lewis’s booking agent and management team further enables us to provide inquiring clients with Rashard Lewis’s speaking fee and appearance cost.

If your goal is to hire Rashard Lewis to be your next keynote speaker or to be the next brand ambassador our celebrity speakers bureau can assist. If Rashard Lewis’s booking fee is outside your companies budget or your unable to align with his appearance availability, our booking agents can provide you a list of talent that aligns with your event theme, budget and event date.

On July 11, 2012, Lewis signed with the Miami Heat on a two-year, $2.8 million deal and was reunited with former Seattle teammate Ray Allen. The Heat finished 66-16, the best record in the 2012–13 season. Lewis won his first championship on June 20, 2013 when the Heat defeated the San Antonio Spurs in a seven-game series.

Lewis earned rave reviews from Heat coach Erik Spoelstra for the way he defended in Game 3 of the 2014 Eastern Conference Finals, even though he finished without a single point, rebound, assist or steal. Lewis worked his way into the starting lineup during the series, earning notoriety for helping the team despite a lack of impressive box score statistics in games 3 and 4. In game 5 of the series, Lewis started again, and scored 18 points on 6 of 9 shooting from behind the three point line although the Pacers won to force a sixth game. In game 6, Lewis started and scored 13 points as the Heat advanced to the NBA Finals. The Heat went on to lose the Finals to the San Antonio Spurs in five games.