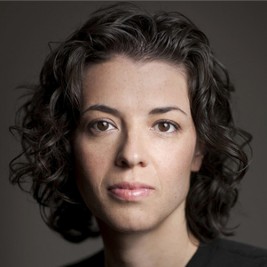 If your goal is to hire Quiara Alegria Hudes to be your next keynote speaker or to be the next brand ambassador our celebrity speakers bureau can assist. If Quiara Alegria Hudes’s booking fee is outside your companies budget or your unable to align with his appearance availability, our booking agents can provide you a list of talent that aligns with your event theme, budget and event date.

Quiara Alegría Hudes is most recently the author of The Elliot Trilogy, three standalone plays that trace the coming of age of a bright, charismatic, and haunted young man who escapes "el barrio" in Philadelphia, becomes a Marine, and in the aftermath of his service in Iraq must find his way to adulthood. Elliot, A Soldier's Fugue premiered at Page 73 Productions in 2006 and was a finalist for the Pulitzer Prize in 2007. Water by the Spoonful premiered at Hartford Stage Company in 2011 and won the 2012 Pulitzer Prize for Drama. The Happiest Song Plays Last premiered at the Goodman Theatre in 2013. The plays have been produced around the country and internationally, including at Off-Broadway's Second Stage Theatre.

Originally trained as a musician, Hudes has authored musicals as well, most notably the book for the Broadway musical In the Heights, which received the 2008 Tony Award for Best Musical, a Tony nomination for Best Book of a Musical, and was a 2009 Pulitzer Prize finalist. For the original Off-Broadway incarnation of Heights, Hudes won the Lucille Lortel and Outer Critics Circle Awards for Best Musical. The touring companies of In the Heights have performed at Puerto Rico's Centro Bellas Artes, LA's Pantages, and Tokyo's International Forum.

Other works include Barrio Grrrl!, a children's musical that premiered at the Kennedy Center for the Performing Arts in 2009 and toured nationally; 26 Miles which premiered at Atlanta's Alliance Theatre in 2009 and was published in American Theatre Magazine; and Yemaya's Belly, Hudes' first play, which premiered at Portland Stage Company and received The Clauder Prize.

Hudes's honors include the United States Artists Fontanals Fellowship, the Joyce Fellowship at the Goodman Theatre, the Aetna New Voices Fellowship at Hartford Stage, the Roe Green Award at the Cleveland Playhouse, fellowships at Sundance Theater Institute and the O'Neill Theater Center, and a residency at New Dramatists. March 16, 2014 was named "Quiara Alegría Hudes Day" in the City of Philadelphia and Mayor Rahm Emmanuel declared April 27, 2013 "Quiara Hudes Day" in Chicago.

After graduating from public school in Philadelphia, Hudes went on to receive a B.A. in music from Yale University and an M.F.A. in playwriting from Brown, where she studied with Paula Vogel. She was recently inducted into the Central High School Hall of Fame--in the first round of women to receive this honor since the school's founding in 1836.

Hudes is on the board of Philadelphia Young Playwrights, which produced her first play in the tenth grade. She now lives in New York with her husband and children.