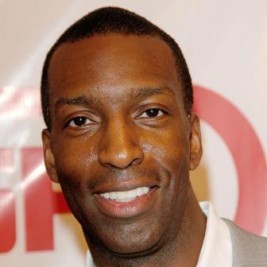 If your goal is to hire Michael Johnson to be your next keynote speaker or to be the next brand ambassador our celebrity speakers bureau can assist. If Michael Johnson’s booking fee is outside your companies budget or your unable to align with his appearance availability, our booking agents can provide you a list of talent that aligns with your event theme, budget and event date.

A 1990 graduate of Baylor University, Johnson won a number of medals at the NCAA Indoor Track and Field Championships during his collegiate career. Johnson's breakthrough onto the world stage came in 1991 when he won the World Championship 200 m title in Tokyo.

A month before the 1992 Summer Olympics Johnson contracted food poisoning, which resulted in weight loss and a loss of form. He consequently failed to qualify for the 200 m final. Nonetheless, he was able to race as a member of the 4 x 400 m relay team, which won a gold medal and set a new world record (2:55.74).

Johnson won the 400 m at the 1993 World Championships in Stuttgart. He also won another gold medal as a member of the 4 x 400 m relay team, setting a new world record (2:54.29). In the 1995 World Championships in Gothenburg Johnson completed his first "double" in a major tournament, winning both the 200 m and 400 m.

The next year, Johnson broke the 200 m world record which had stood for nearly 17 years when he ran 19.66 s at the USA National Championships. With that performance he qualified to run at the 1996 Olympic Games in Atlanta and prepared to attempt to win both the 200 m and 400 m races. This feat had never before been achieved by a man. Some considered it to be impossible because of the overlapping schedule for the two events, since a 200 m / 400 m attempt was so unusual. (Two women have won Olympic gold medals in both races in the same year: Valerie Brisco-Hooks in 1984 and Marie-José Perec, in the same 1996 Olympics.)

On July 29 he easily captured the 400 m Olympic title with a time of 43.49 s, beating Roger Black of Great Britain by almost a second. At the 200 m final on August 1, Johnson ran the opening 100 m in 10.12 s, achieved a peak speed of over 40 km/h (25 mph), and finished the race in 19.32 s, shattering the world record he had set just months before. This was the largest improvement ever on a 200 m world record. Some commentators compared the performance to Bob Beamon's 1968 long jump in Mexico because of the magnitude of the improvement over the previous record. In the nearly 10 years since this record was set, no other athlete has even approached Johnson's first world record mark of 19.66 s leading many to believe that the current mark will endure. He received the James E. Sullivan Award in the same year as the top amateur athlete in the United States.

In 1997 Johnson began performing television promos in which he billed himself as "the fastest man in the world" although that title usually refers to the 100 metres world record holder, at the time Canadian Donovan Bailey. In a publicity stunt during June of 1997, he raced against Bailey in a 150 m race at the Rogers Centre (then SkyDome) in Toronto. The 150 m consisted of 75 m of curving track and 75 m of straight away, a configuration that was unique to this unsanctioned event. The race was billed as a competition for the title of "World's Fastest Man", but failed to live up to expectations when Johnson pulled out a few moments into the race with an injured quadriceps, allowing Bailey to easily win the race (and the $1.5 million prize). Johnson recovered from the injury, and that same year he won his third 400 m World Champion title.

In 1999 he was again plagued by injury, and his following season was troubled with two injury scares that limited him to just four 400 m races before the World Championships in Seville. Were it not for the IAAF's policy of allowing defending champions automatic entry, he would not have raced in Seville, since he failed to compete in the USA trials due to his injury. He recovered and won his fourth 400 m World Champion title with a new world record of 43.18 s. He later ran the last leg of the 4 x 400 m relay, adding a ninth World Championship gold medal to his collection.

Johnson ended his career at the 2000 Summer Olympics in Sydney by winning the 400 m gold and 4 x 400 m relay race, bringing his total number of Olympic gold medals to five.

He was also nicknamed the "Duck" for his unique running style. With the head bobbing backwards and forward, straight back and not much arm drive. When asked by a reporter "If you had a usual running technique like other runners do you think you would go faster?". His response was "If I ran like all the other runners, I would be back there with them".

Since retiring from competitive sport he has worked as a television athletics pundit, often for the BBC in the United Kingdom.