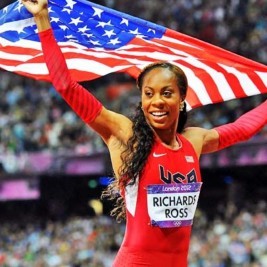 If your goal is to hire Sanya Richards-Ross to be your next keynote speaker or to be the next brand ambassador our celebrity speakers bureau can assist. If Sanya Richards-Ross’s booking fee is outside your companies budget or your unable to align with his appearance availability, our booking agents can provide you a list of talent that aligns with your event theme, budget and event date.

Returning from an injury that prematurely ended her 2010 season, in 2011 Richards-Ross ran an impressive 49.66 just prior to the World Championships, in Daegu, South Korea but wound up seventh in the final. She later returned to top form in the 4x400 m relay, this time running the lead-off leg in an impressive 49.1, setting the team up for victory. It was her record fifth gold medal from the World Championships.