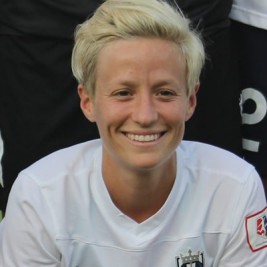 Businesses, Non-profit organizations, event planners and companies across the country have worked closely with our booking agents to hire Megan Rapinoe for a speaking engagements, guest appearances, product endorsements and corporate events. Many of those same clients have continued to turn to our speakers bureau as we can easily align Megan Rapinoe’s availability with their upcoming seminar, gala, annual conference, corporate function, and grand opening. Our close relationship with Megan Rapinoe’s booking agent and management team further enables us to provide inquiring clients with Megan Rapinoe’s speaking fee and appearance cost.

If your goal is to hire Megan Rapinoe to be your next keynote speaker or to be the next brand ambassador our celebrity speakers bureau can assist. If Megan Rapinoe’s booking fee is outside your companies budget or your unable to align with his appearance availability, our booking agents can provide you a list of talent that aligns with your event theme, budget and event date.

Megan Rapinoe was born July 5, 1985 and is an American professional soccer midfielder who currently plays for Olympique Lyonnais in the French League and is a member of the United States women's national soccer team. She is widely known for her crafty style of play and her precise cross to Abby Wambach which tied the game in the 122nd minute of the 2011 FIFA Women's World Cup quarterfinals against Brazil. She scored 3 goals and tallied a team-high 4 assists to lead the United States to a gold medal in the 2012 Summer Olympics.

Rapinoe helped lead the United States to a gold medal in the 2012 Olympic Games in London, United Kingdom. She started all six games and scored the game-winning goal vs. Colombia. She went on to score two game-equalizing goals in the semifinals vs. Canada including a rare 'Gol Olimpico' – a corner kick that goes untouched into the net.

According to official US Soccer match reports, she ended the tournament with three goals and a team-high of four assists (tied with Alex Morgan). Rapinoe was widely regarded as one of the top players of the Olympics and made numerous 'Team of the Tournament' lists including those selected by the BBC and All White Kit.

Rapinoe had a career-high 8 goals and 12 assists for the United States in 2012.