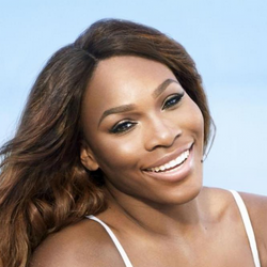 If your goal is to hire Serena Williams to be your next keynote speaker or to be the next brand ambassador our celebrity speakers bureau can assist. If Serena Williams’s booking fee is outside your companies budget or your unable to align with his appearance availability, our booking agents can provide you a list of talent that aligns with your event theme, budget and event date.

Serena Williams was born September 26, 1981 and is an American professional tennis player who is ranked No. 1 in women's singles tennis. The Women's Tennis Association (WTA) has ranked her world No. 1 in singles on six separate occasions. She became the world No. 1 for the first time on July 8, 2002, and achieved this ranking for the sixth time on February 18, 2013. Williams has spent 256 weeks overall as the WTA ranked #1 as of August 30, 2015, placing her 4th on the List of WTA number 1 ranked players. On July 13, 2015 she marked the first time in WTA history that the No. 1 player had more than twice as many points as No. 2. She is the reigning champion of the Australian Open, French Open, Wimbledon, U.S. Open, WTA Tour Championships and Olympic women's singles and doubles. Williams is regarded by some commentators, sports writers, and current and former players as the greatest female tennis player of all-time.

Williams holds the most major singles, doubles, and mixed doubles titles combined amongst active players, male or female. Her record of 36 major titles puts her fifth on the all-time list and second in the open era with: 21 in singles, 13 in women's doubles, and two in mixed doubles. She is the most recent player, male or female, to have held all four major singles titles simultaneously (2002–03 and 2014–15), the fifth woman ever to do so and only the second player, male or female, to achieve this record twice after Rod Laver of Australia. She is also the most recent player, together with her sister Venus Williams, to have held all four Grand Slam women's doubles titles simultaneously (2009–10).

Her total of 21 Grand Slam singles titles is third on the all-time list behind Margaret Court (24) and Steffi Graf (22), and second in the Open Era, behind only Graf. She is the only tennis player – female or male – to have won singles titles at least six times in three of the four Grand Slam tournaments.

She has won 13 Grand Slam doubles titles with her sister Venus and the pair are unbeaten in Grand Slam tournament finals. Williams is also a five-time winner of the WTA Tour Championships.[18] The arrival of the Williams sisters has been credited with launching a new era of power tennis in the women's game. Williams has won four Olympic gold medals, one in women's singles and three in women's doubles, an all-time record shared with her sister Venus Williams.