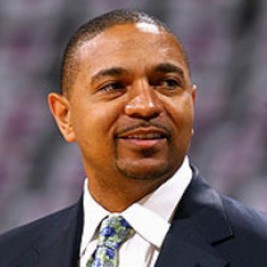 Businesses, Non-profit organizations, event planners and companies across the country have worked closely with our booking agents to hire Mark Jackson for a speaking engagements, guest appearances, product endorsements and corporate events. Many of those same clients have continued to turn to our speakers bureau as we can easily align Mark Jackson’s availability with their upcoming seminar, gala, annual conference, corporate function, and grand opening. Our close relationship with Mark Jackson’s booking agent and management team further enables us to provide inquiring clients with Mark Jackson’s speaking fee and appearance cost.

If your goal is to hire Mark Jackson to be your next keynote speaker or to be the next brand ambassador our celebrity speakers bureau can assist. If Mark Jackson’s booking fee is outside your companies budget or your unable to align with his appearance availability, our booking agents can provide you a list of talent that aligns with your event theme, budget and event date.

Mark Jackson, born April 1, 1965, is an American former NBA player and former basketball coach. Mark was regarded as one of the nations elite point guards while attending in the Fort Greene section of Brooklyn under Coach Patrick Quigley. Mark gained a reputation as a streetballer in New York and a college hoops star at St. John's University, and was made the 18th pick of the 1987 NBA Draft by the New York Knicks. He played for the New York Knicks, Indiana Pacers, Los Angeles Clippers, Denver Nuggets, Toronto Raptors, Utah Jazz and Houston Rockets in the NBA in a career spanning from 1987 to 2004. After retiring from playing basketball, Jackson became a broadcast commentator for ESPN and ABC alongside his former coach Jeff Van Gundy and play-by-play man Mike Breen. He also worked as an analyst for The YES Network's New Jersey Nets games. In 2011, the Golden State Warriors hired Jackson as head coach. He coached the team for three seasons, but was fired in 2014 despite leading the Warriors to consecutive playoff appearances for the first time in over 20 years. On May 17, 2014, Jackson reached a multiyear agreement to return to ESPN as a game analyst.