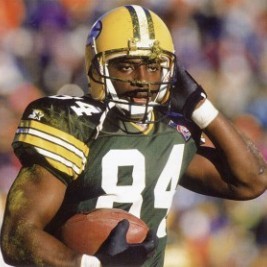 If your goal is to hire Sterling Sharpe to be your next keynote speaker or to be the next brand ambassador our celebrity speakers bureau can assist. If Sterling Sharpe’s booking fee is outside your companies budget or your unable to align with his appearance availability, our booking agents can provide you a list of talent that aligns with your event theme, budget and event date.

Growing up, Sterling Sharpe lived in Georgia with his grandmother and siblings, one being his brother, NFL Pro-Bowl tight end Shannon Sharpe. He attended Glennview High, playing running back, quarterback, and linebacker and was a member of the basketball and track teams. At the University of South Carolina, Sharpe set school records with 169 career receptions and 2,497 receiving yards and a since-broken record of 17 career touchdowns.

Sharpe was the first round draft pick of the Packers in 1988 and had an immediate impact on the team. In his rookie season he started all sixteen games and caught 55 passes. His sophomore season he led the league with 90 receptions and was the first of the Packers to do so since Don Hutson in 1945 and broke Hutson's record of receptions and receiving yards in a season.

A few years later, in 1992, Sharpe and the new quarterback, Brett Favre, teamed up to become one of the top passing tandems in the league. In the final game of that season he and Favre hooked up for a touchdown pass, making it Sharpe's 107th reception of the season, breaking Art Monk's record that had been set in 1984, but in the 1993 season Sharpe broke it again with 112 receptions making him the first player to catch over 100 passes in two straight seasons.

His younger brother Shannon was one of the NFL's top tight ends from the 1990s through the early 2000s. Shannon retired in 2003 and once again followed in his brother's footsteps, becoming a sportscaster.