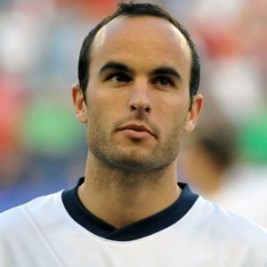 Businesses, Non-profit organizations, event planners and companies across the country have worked closely with our booking agents to hire Landon Donovan for a speaking engagements, guest appearances, product endorsements and corporate events. Many of those same clients have continued to turn to our speakers bureau as we can easily align Landon Donovan’s availability with their upcoming seminar, gala, annual conference, corporate function, and grand opening. Our close relationship with Landon Donovan’s booking agent and management team further enables us to provide inquiring clients with Landon Donovan’s speaking fee and appearance cost.

If your goal is to hire Landon Donovan to be your next keynote speaker or to be the next brand ambassador our celebrity speakers bureau can assist. If Landon Donovan’s booking fee is outside your companies budget or your unable to align with his appearance availability, our booking agents can provide you a list of talent that aligns with your event theme, budget and event date.

Landon Donovan grew up in Redlands, California, and at only 17-years-old, Landon signed a professional contract with Bayer Leverkusen in February 1999, shortly before playing in the Under-17 World Championship, where Donovan won the Golden Ball as the tournament's best player.

Donovan could not break into the first team with Leverkusen. Unhappy with his situation in Germany, Donavan was loaned to the San Jose Earthquakes in Majpor League Soccer, for the beginning of the 2001 season. Donovan had immediate success in the MLS and led the Earthquakes to the MLS Championship in 2001 and in 2003 and became one of the most recognizable faces American soccer. Donovan was named U.S. Soccer Athlete of the Year in 2003.

Donovan has been successful on the international stage, as well. After starring in the 2000 Summer Olympics, Donovan earned his first cap for the U.S. National Team against Mexico. Donovan was integral to the United States' unprecedented run to the quarterfinals of the 2002 World Cup and scored two goals.

Donovan has amassed over 75 caps for the US and has scored scored 25 goals. Donovan even recorded a rare four-goal game against Cuba in 2003. Donovan is also the United States' all-time assist leader, breaking Cobi Jones' record.

In early 2005, after again failing to perform for Bayer, Donovan returned to the MLS with the Los Angeles Galaxy. In his first season Donovan scored 12 league goals and 10 assists. Donovan added four goals and an assist in the playoffs as the Galaxy won the MLS Cup, the third title of his career.

Donovan also became the MLS' all-time leading scorer in the playoffs with 14 goals. He was named to the MLS All-Time Best XI after the season.