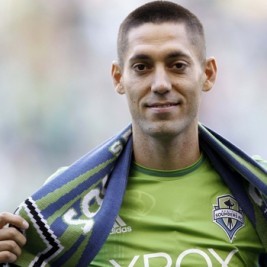 Businesses, Non-profit organizations, event planners and companies across the country have worked closely with our booking agents to hire Clint Dempsey for a speaking engagements, guest appearances, product endorsements and corporate events. Many of those same clients have continued to turn to our speakers bureau as we can easily align Clint Dempsey’s availability with their upcoming seminar, gala, annual conference, corporate function, and grand opening. Our close relationship with Clint Dempsey’s booking agent and management team further enables us to provide inquiring clients with Clint Dempsey’s speaking fee and appearance cost.

If your goal is to hire Clint Dempsey to be your next keynote speaker or to be the next brand ambassador our celebrity speakers bureau can assist. If Clint Dempsey’s booking fee is outside your companies budget or your unable to align with his appearance availability, our booking agents can provide you a list of talent that aligns with your event theme, budget and event date.

Clint Dempsey was born March 9, 1983 and is an American soccer player who plays for Seattle Sounders FC in Major League Soccer and has served as the captain of the United States national team. He has also played for New England Revolution, Fulham and Tottenham Hotspur.

Growing up in Nacogdoches, Texas, Dempsey played for one of the top youth soccer clubs in the state, the Dallas Texans, before playing for Furman University's men's soccer team. In 2004, Dempsey was drafted by Major League Soccer club New England Revolution, where he quickly integrated himself into the starting lineup. Hindered initially by a jaw injury, he would eventually score 25 goals in 71 appearances with the Revolution. Between 2007 and 2012, Dempsey played for Premier League team Fulham and is the club's highest Premier League goalscorer of all time. Dempsey became the first American player to score a hat-trick in the English Premier League, in the 5–2 win over Newcastle United in January 2012.

Dempsey first represented the United States at the 2003 FIFA World Youth Championship and made his first appearance with the senior team on November 17, 2004, against Jamaica. He has earned over 100 caps and scored 47 international goals, making him the nation's sixth-most capped player and second top scorer of all time. He has represented the nation at four CONCACAF Gold Cups (winning two), helped them to the final of the 2009 FIFA Confederations Cup and played at three FIFA World Cups, becoming the first American male to score in three World Cups.