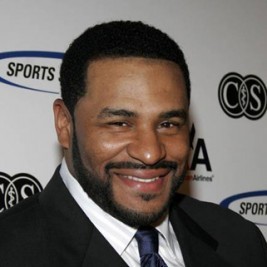 Businesses, Non-profit organizations, event planners and companies across the country have worked closely with our booking agents to hire Jerome Bettis for a speaking engagements, guest appearances, product endorsements and corporate events. Many of those same clients have continued to turn to our speakers bureau as we can easily align Jerome Bettis’s availability with their upcoming seminar, gala, annual conference, corporate function, and grand opening. Our close relationship with Jerome Bettis’s booking agent and management team further enables us to provide inquiring clients with Jerome Bettis’s speaking fee and appearance cost.

If your goal is to hire Jerome Bettis to be your next keynote speaker or to be the next brand ambassador our celebrity speakers bureau can assist. If Jerome Bettis’s booking fee is outside your companies budget or your unable to align with his appearance availability, our booking agents can provide you a list of talent that aligns with your event theme, budget and event date.

Bettis attended the University of Notre Dame and finished his career with 337 rushing attempts for 1912 yards (5.7 yards per rushing attempt avg.), and made 32 receptions for 429 yards (13.4 yards per reception). In his last game as a senior, he rushed 20 times for 75 yards and led Notre Dame to a 28-3 victory over Texas A&M in the Cotton Bowl.

Bettis was picked in the first round (10th overall) of the 1993 draft by the Los Angeles Rams. A star even in his rookie year, he rushed for 1429 yards in 1993, and was named Offensive Rookie of the Year. He rushed for over 1,000 in his second season with the Rams but his carries declined as he fell out of favor with the team.

After Rams head coach Chuck Knox retired and was replaced by Rich Brooks, Bettis no longer fit into the team's plans. The Steelers were in need of a running back: Bam Morris, their featured back in the 1995 season, had pleaded guilty to marijuana possession and was cut by the team in June, 1996. Bettis was traded to Pittsburgh that summer with a third round draft pick in exchange for a second round pick in 1996 and a fourth round draft pick in 1997.

His career took an up turn after the trade, and Bettis became an integral part of the Steelers offense. Bettis was a dependable 1,000-yard rusher until 2001. Although age had slightly reduced his role, he remained important to the Steelers and was the NFL's 5th leading all-time rusher. He was named to the Pro Bowl in 1993, 1994, 1996, 1997, 2001, and 2004. Bettis won the NFL Comeback Player of the Year award in 1996, and in 2002 he was the recipient of the Walter Payton Man of the Year Award.

During the 2004 season, Bettis and New York Jets running back Curtis Martin dueled for position on the all-time rushing yards leaderboard. Bettis entered the season in 6th place all-time and 684 yards ahead of Martin in 9th place. Due to Bettis being the backup in Pittsburgh for the start of the season, Martin was able to pass Bettis in week 13 until the Steelers played their game later in the day and Bettis retook the lead by 6 yards. When the Jets traveled to Martin's home town of Pittsburgh to play the Steelers the following week, both backs would cross the 13,000 yard mark, making this the first time two players crossed the 13,000 yard mark (or other similarly high yardage milestones) in the same game. Their combined career totals were also one of the biggest combined career totals for opposing running backs in history. At the end of the game, Martin would lead Bettis by 9 yards. Two weeks later in week 16, Bettis would again pass Martin and establish himself with a lead of 81 yards. In doing so, Bettis passed Eric Dickerson for 4th place on the all-time list. Bettis sat out the final week of the season, and when Martin rushed for 153 yards that week he passed Dickerson and Bettis for the final time.

After the Steelers' defeat in the 2004 AFC Championship Game on January 23, 2005, Bettis announced that he was considering retirement, but would not make a final decision for several months to prevent the sting of the defeat from clouding his judgement. Later, Bettis agreed to stay with the Steelers for another season. He stated he would love to play in the Super Bowl in 2006 since it was to be played in his hometown of Detroit. His wish came true as the Steelers played in, and won, Super Bowl XL (40) against the Seattle Seahawks 21-10 on February 5th, 2006.

Shortly after the Steelers lost the 2004-2005 AFC Championship game to the eventual Super Bowl XXXIX champion New England Patriots, Ben Roethlisberger approached Bettis. He promised Bettis that if he came back for one last season, he would get him to the Super Bowl. Apparently, it was this promise that got Jerome Bettis to play one last season. In 12 NFL seasons, Bettis had reached the playoffs 5 times, but had never been in the Super Bowl.

In week 17 of the 2005 NFL season, Bettis rushed for 41 yards and three touchdowns against the Detroit Lions. The Steelers won 35-21 and thanks to Bettis' three touchdowns, they clinched a playoff berth. When Bill Cowher pulled Bettis from the game late in the fourth quarter, he was given a standing ovation from the Steeler fans. This game would be the last home game (not including the neutral-site Super Bowl) for Jerome Bettis.

Bettis contributed 52 yards and a touchdown in the Steelers' wildcard playoff victory over the Cincinnati Bengals on January 8. After their wildcard win, Ben Roethlisberger revealed to the team that he promised to Bettis that he would get him to the Super Bowl, in order to get him to come back for the 2005 season.

On January 15, 2006, Bettis was the center of one of football's most memorable endings in a divisional playoff game against the Indianapolis Colts. While the Steelers offensive attack was mostly pass driven during the game, Bettis ran well, taking in 46 yards on 17 rushes, including one touchdown. When the Steelers took possession of the ball on the Indianapolis 2 yard line with 1:20 remaining in the game, leading 21-18, the outcome seemed almost certain. The first play from scrimmage went to the surehanded Bettis, who had not fumbled once the entire year. As Bettis ran towards the end zone, Colts linebacker Gary Brackett popped the ball out of Jerome's hands, where it was picked up by cornerback Nick Harper, (seeming another sign of the Sports Illustrated cover jinx) who was stopped from returning the fumble all the way for a touchdown by Steelers quarterback Ben Roethlisberger. Ultimately, however, Bettis's mistake did not result in a Steelers loss, as Colts kicker Mike Vanderjagt missed a 46-yard game-tying field goal, ending the game with a 21-18 Steelers victory.

The next week, the Steelers were set to face off against the Denver Broncos in the AFC Championship game. Bettis, who had never been to a Super Bowl in his storied career, delivered a rousing speech to his teammates the day before the game, asking them to "Just get me to Detroit," his hometown, where Super Bowl XL was to be played. Bettis's wish was granted, as he and the Steelers advanced to Super Bowl XL with a 34-17 win over the Broncos, led by Ben Roethlisberger's arm and Bettis's 39 yards on 15 carries, including a touchdown. After the game was over, Bettis found his parents in the crowd and mouthed the words "We're going home" to them.

In front of a crowd that was estimated by NFL analysts in attendance to be "80% - 90% Steeler fans" (as evident by the influx of "Terrible Towels" seen waving in the crowd), Pittsburgh would go on to defeat the Seattle Seahawks in Super Bowl XL, 21-10. Bettis rushed for 43 yards on 14 carries; an average of 3.1 yards per carry.

Asked about the possibility of retirement, Bettis announced, "It's been an incredible ride. I played this game to win a championship. I'm a champion [now], and I think the Bus' last stop is here in Detroit." Thus, Jerome Bettis officially announced his retirement standing on the champions' podium, holding the Vince Lombardi Trophy. Hines Ward, the MVP of the game, said during the Super Bowl commercial; "I'm going to Disney World and I'm taking The Bus!"

For his long career in the NFL, and his status as a native of Detroit, Jerome Bettis was awarded the key to the city of Detroit.

During post-game celebrations on Ford Field, Bettis was given a Gatorade shower by some of his teammates. While the tradition of dunking a head coach has become commonplace, this may have been the first such shower of a player in Super Bowl history.

In February 2006, at the 2006 Winter Olympics, NBC Sports announced that Bettis had been signed as a studio commentator for NBC's new Football Night in America Sunday night pregame show.

On Tuesday, April 18, 2006, Bettis and his parents teamed up with Don Barden, chairman and chief executive officer of PITG Gaming LLC, in order to get a gambling casino called the Majestic Star, on Pittsburgh's North Side. Their plan would aid the NHL's Pittsburgh Penguins with funding for a new ice arena. Barden said that he would give $7.5 million a year for 30 years to help build a new arena .

Bettis is also in talks to open a restaurant on Pittsburgh's North Side called "Jerome Bettis' Grill 36".

On May 21st, 2006 Bettis received an honorary Doctoral degree from Lawrence Technological University in Southfield, Michigan for providing remarkable benefits to young people. He will be awarded the Doctor of Humanities, honoris causa, recognizing his leadership in founding the innovative "Cyber Bus" program that to date has enabled some 120 Detroit middle and high school students to both build and use the latest computer technology.