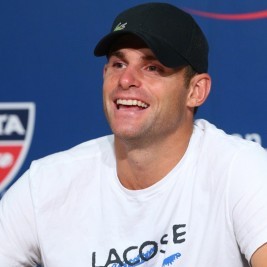 Businesses, Non-profit organizations, event planners and companies across the country have worked closely with our booking agents to hire Andy Roddick for a speaking engagements, guest appearances, product endorsements and corporate events. Many of those same clients have continued to turn to our speakers bureau as we can easily align Andy Roddick’s availability with their upcoming seminar, gala, annual conference, corporate function, and grand opening. Our close relationship with Andy Roddick’s booking agent and management team further enables us to provide inquiring clients with Andy Roddick’s speaking fee and appearance cost.

If your goal is to hire Andy Roddick to be your next keynote speaker or to be the next brand ambassador our celebrity speakers bureau can assist. If Andy Roddick’s booking fee is outside your companies budget or your unable to align with his appearance availability, our booking agents can provide you a list of talent that aligns with your event theme, budget and event date.

He became a Grand Slam singles champion when he won the title at the 2003 US Open, defeating Juan Carlos Ferrero in the final. He is currently the last North American male player to win a Grand Slam singles event, and the last to both become world No. 1 and year-end world No. 1 (2003). Roddick reached four other Grand Slam finals (Wimbledon in 2004, 2005, and 2009, and the US Open in 2006), losing to Roger Federer every time. He is married to Brooklyn Decker, a Sports Illustrated swimwear model and actress.

On August 30, 2012, during the 2012 US Open and on his 30th birthday, Roddick announced that he would retire after the tournament. Following a fourth-round defeat by Juan Martín del Potro, Roddick retired from the sport with the aim of focusing on his foundation, the Andy Roddick Foundation, in future years.