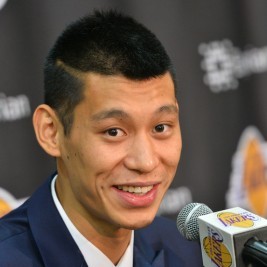 Businesses, Non-profit organizations, event planners and companies across the country have worked closely with our booking agents to hire Jeremy Lin for a speaking engagements, guest appearances, product endorsements and corporate events. Many of those same clients have continued to turn to our speakers bureau as we can easily align Jeremy Lin’s availability with their upcoming seminar, gala, annual conference, corporate function, and grand opening. Our close relationship with Jeremy Lin’s booking agent and management team further enables us to provide inquiring clients with Jeremy Lin’s speaking fee and appearance cost.

If your goal is to hire Jeremy Lin to be your next keynote speaker or to be the next brand ambassador our celebrity speakers bureau can assist. If Jeremy Lin’s booking fee is outside your companies budget or your unable to align with his appearance availability, our booking agents can provide you a list of talent that aligns with your event theme, budget and event date.

Jeremy Shu-How Lin is an American professional basketball player who currently plays for the Charlotte Hornets of the National Basketball Association (NBA). He unexpectedly led a winning turnaround with the New York Knicks in 2012, which generated a global following known as "Linsanity".

After receiving no athletic scholarship offers out of high school and being undrafted out of Harvard University, Lin reached a partially guaranteed contract deal in 2010 with his hometown Golden State Warriors. He seldom played in his rookie season and was assigned to the NBA Development League (D-League) three times. He was waived by the Warriors and the Houston Rockets the following preseason before joining the New York Knicks early in the 2011–12 season. He continued to be played sparingly and again spent time in the D-League. In February 2012, he led a winning streak by New York while being promoted to the starting lineup. In the summer of 2012, Lin signed a three-year contract with the Rockets, for whom he played two seasons before the Los Angeles Lakers acquired him in a trade. He played one season with the Lakers before signing with the Hornets.

Lin is one of the few Asian Americans in NBA history, and the first American of Chinese or Taiwanese descent to play in the league. He is also known for his public expression of his Christianity.