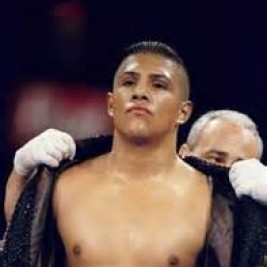 If your goal is to hire Fernando Vargas to be your next keynote speaker or to be the next brand ambassador our celebrity speakers bureau can assist. If Fernando Vargas’s booking fee is outside your companies budget or your unable to align with his appearance availability, our booking agents can provide you a list of talent that aligns with your event theme, budget and event date.

He was formerly trained by International Boxing Hall Of Fame member Lou Duva. He is promoted by Main Events, a prominent promotional firm. His manager is Shelly Finkel, who also manages the career of Mike Tyson. Through his association with Duva, Fernando become friends with world champions such as Pernell Whitaker and Mark Breland.

Some of Fernando's victims include former world champions Raul Marquez, Ike Quartey and Winky Wright (though many thought Wright won his fight against Vargas). His losses to Felix Trinidad, Oscar De La Hoya, and Shane Mosley remain his only career defeats and he is a favorite of American cable tv giant HBO.

Fernando is very good friends with Julio Cesar Chavez; Chavez has been part of Vargas' ring entourage in at least two fights (the fight with Trinidad and the fight with de la Hoya).

Vargas lost a controversial decision in the second round of the 1996 Atlanta Olympics thanks to the much-maligned and often-ridiculed Olympic scoring system. Disappointed, but undaunted, Vargas set his sights on achieving greatness in the professional ranks.

Vargas was scheduled to turn pro on November of 1996, however, while training for the bout he broke his right hand. Eager to turn pro and begin his march toward a world championship, Vargas "ferociously" followed his physical therapy program, and within five months he was ready for his professional debut.

In his professional debut on March 25, 1997, Vargas crushed Jorge Morales -- a veteran of 33 bouts -- in just 56 seconds. Immediately, a star was born. Fernando blasted his next five opponents within two rounds, eliminating four of his five challengers in one round. After six professional bouts, Vargas had fought a total of only eight rounds.

Vargas won his first world title in 1998, knocking out Yori Boy Campas in seven rounds for the IBF belt.

On August 20, 2005, he returned to the boxing ring to fight fellow former world Jr. Middleweight champion Javier Castillejo of Spain. Vargas dropped Castillejo in the third round, but he apparently broke his right hand and went on to win by a ten round unanimous decision.

In 2001, Vargas founded the "Ferocious Foundation for Kids" as a way to give back to his community a small portion of the riches he has obtained as a boxer. On December 22, 2004, the organization had its fourth annual Christmas toy giveaway in Oxnard.