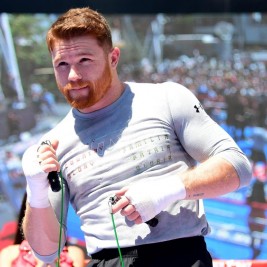 Businesses, Non-profit organizations, event planners and companies across the country have worked closely with our booking agents to hire Canelo Alvarez for a speaking engagements, guest appearances, product endorsements and corporate events. Many of those same clients have continued to turn to our speakers bureau as we can easily align Canelo Alvarez’s availability with their upcoming seminar, gala, annual conference, corporate function, and grand opening. Our close relationship with Canelo Alvarez’s booking agent and management team further enables us to provide inquiring clients with Canelo Alvarez’s speaking fee and appearance cost.

If your goal is to hire Canelo Alvarez to be your next keynote speaker or to be the next brand ambassador our celebrity speakers bureau can assist. If Canelo Alvarez’s booking fee is outside your companies budget or your unable to align with his appearance availability, our booking agents can provide you a list of talent that aligns with your event theme, budget and event date.

At the age of 26, Mexico’s Canelo Alvarez (48-1-1, 34 KOs) has conquered the boxing world, captivating fans both in Mexico and around the globe with his action-packed fighting style, charisma and willingness to take on the toughest challenges.

With his red hair and freckles, baby-faced Canelo Alvarez may not appear to be your typical Mexican warrior. However, one look at the hard-hitting WBC middleweight champion in the ring makes it clear that he is following firmly in the footsteps of Mexican greats such as Barrera, Morales, Sanchez, and Chavez.

Alvarez’s road to stardom began in 2011 with a win over Matthew “Magic” Hatton for the vacant WBC Super Welterweight World title in March, his first title defense against Ryan Rhodes in June and stoppage victories over Alfonso Gomez and former World Champion Kermit Cintron in September and November respectively.

On May 5, 2012, Alvarez defended his belt for the fourth time when he faced future Hall of Famer Sugar Shane Mosley as part of the “Ring Kings: Mayweather vs. Cotto” pay-per-view telecast. Even though the fight lasted 12 rounds, the popular Mexican showed the 40 year-old veteran the road to retirement, winning via unanimous decision. The victory over Mosley set up a September 15 showdown with breakout star Josesito Lopez in which he knocked Lopez down three times before ending the bout with a fifth round technical knockout.

Next, boxing’s most popular phenom continued on the path to superstardom with a 12-round unanimous decision over WBA Super Welterweight World Champion Austin Trout on May 4, 2013 in front of over 39,000 fans at the Alamodome in San Antonio, Texas which made him a unified world champion. The win proved Alvarez’s supremacy at 154 pounds and also made it clear that he was a bona fide ticket seller wherever he decided to fight.

On September 14, 2013, Alvarez faced the man on top of the pound-for-pound list, Floyd “Money” Mayweather. He put forth a stellar effort before falling short of victory for the first time as a professional via a 12-round majority decision. The fight ended up being not just the biggest of 2013, but also the second highest grossing bout of all time and the second most watched boxing event ever on Mexican television (only behind this year’s Mayweather-Pacquiao).

Since then, Alvarez has won three straight fights, defeating top stars Alfredo “Perro” Angulo on March 8, 2014 via technical knockout in the 10th round and Erislandy “The American Dream” Lara via split decision on July 12, 2014. On May 9, 2015, Alvarez dazzled with a victory over the fierce James “Mandingo Warrior” Kirkland at Minute Maid Park in Houston in front of more than 31,000 fans that featured what many have already deemed the “Knockout of the Year.” Canelo closed out 2015 with a victory by decision over Miguel Cotto in November.

Alvarez rang in 2016 by being presented with the WBC Middleweight World Championship belt in Mexico City.