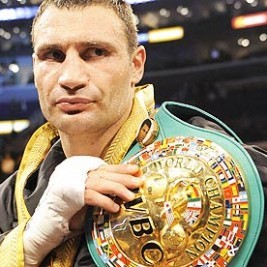 If your goal is to hire Vitali Klitschko to be your next keynote speaker or to be the next brand ambassador our celebrity speakers bureau can assist. If Vitali Klitschko’s booking fee is outside your companies budget or your unable to align with his appearance availability, our booking agents can provide you a list of talent that aligns with your event theme, budget and event date.

Vitali Klitschko is a Ukrainian politician and the current Mayor of Kiev (the capital and largest city in Ukraine), head of the Kiev City State Administration and former professional boxer. He is the leader of the Petro Poroshenko Bloc and a former Member of the Ukrainian Parliament. He is the former WBC, WBO and The Ring magazine heavyweight champion and has been conferred as Champion Emeritus by the WBC. Klitschko became actively involved in Ukrainian politics in 2005 and combined this with his professional boxing career until his departure from boxing mid-December 2013. Klitschko was the first professional boxing world champion to hold a PhD degree.

Klitschko was known for his powerful punches and durable chin. With an 87.23% knockout percentage rate, he holds the second best knockout-to-fight ratio of any champion in heavyweight boxing history, after Rocky Marciano's 87.76% and is the 8th longest reigning heavyweight champion of all time. He has never been knocked down in any professional boxing bout. His two losses have come via a shoulder injury during a fight and a deep cut below his eye, which were recorded as RTD and TKO losses. In both fights, however, he was leading on the scorecards. His power and his possession of a doctorate have led to his nickname, Dr. Ironfist.

Klitschko formally began his political career in 2006 when he placed second in the Kiev mayoral race. In 2010 Klitschko founded the party Ukrainian Democratic Alliance for Reform and was elected into parliament for this party in 2012. He was a leading figure in the 2013–2014 Euromaidan protests, and he announced his possible candidacy for the Ukrainian presidency but later withdrew and endorsed Petro Poroshenko. He was elected Mayor of Kiev on 25 May 2014. Klitschko headed the election list of the winner of the 2014 Ukrainian parliamentary election, the Petro Poroshenko Bloc, but he gave up his parliamentary seat to stay on as Mayor of Kiev. On 28 August 2015 the UDAR party merged into Petro Poroshenko Bloc. Klitschko became so the new party leader.