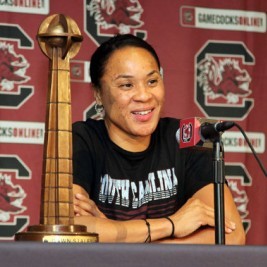 Businesses, Non-profit organizations, event planners and companies across the country have worked closely with our booking agents to hire Dawn Staley for a speaking engagements, guest appearances, product endorsements and corporate events. Many of those same clients have continued to turn to our speakers bureau as we can easily align Dawn Staley’s availability with their upcoming seminar, gala, annual conference, corporate function, and grand opening. Our close relationship with Dawn Staley’s booking agent and management team further enables us to provide inquiring clients with Dawn Staley’s speaking fee and appearance cost.

If your goal is to hire Dawn Staley to be your next keynote speaker or to be the next brand ambassador our celebrity speakers bureau can assist. If Dawn Staley’s booking fee is outside your companies budget or your unable to align with his appearance availability, our booking agents can provide you a list of talent that aligns with your event theme, budget and event date.

Dawn Michelle Staley is an American hall of fame player and coach. Staley is a three-time Olympian and was elected to carry the United States flag at the opening ceremony of the 2004 Summer Olympics. After playing point guard for the University of Virginia and winning the gold medal at the 1996 Summer Olympics, she went to play professionally in the American Basketball League and the WNBA. In 2011, Staley was voted in by fans as one of the Top 15 players in WNBA history. She was elected to the Naismith Memorial Basketball Hall of Fame in 2013.

On May 7, 2008 she was named the University of South Carolina women's head basketball coach. Over the following six seasons, she improved her program's record every year, up to winning the SEC in 2013-2014. In late 2014 her team achieved the program's first #1 ranking, making her only the second individual to both play on and coach a #1 ranked team.