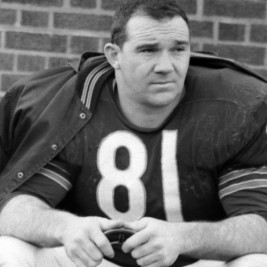 Businesses, Non-profit organizations, event planners and companies across the country have worked closely with our booking agents to hire Doug Atkins for a speaking engagements, guest appearances, product endorsements and corporate events. Many of those same clients have continued to turn to our speakers bureau as we can easily align Doug Atkins’s availability with their upcoming seminar, gala, annual conference, corporate function, and grand opening. Our close relationship with Doug Atkins’s booking agent and management team further enables us to provide inquiring clients with Doug Atkins’s speaking fee and appearance cost.

If your goal is to hire Doug Atkins to be your next keynote speaker or to be the next brand ambassador our celebrity speakers bureau can assist. If Doug Atkins’s booking fee is outside your companies budget or your unable to align with his appearance availability, our booking agents can provide you a list of talent that aligns with your event theme, budget and event date.

Doug Atkins was born May 8, 1930 in Humboldt, Tennessee and is a former defensive end who played for the Cleveland Browns, the Chicago Bears and the New Orleans Saints. He played college football at the University of Tennessee under legendary head coach Robert Neyland. He is a member of the College Football Hall of Fame and the Pro Football Hall of Fame.

Atkins was a fierce defender who was known for using his immense size and agility to his advantage. At 6'8, Atkins would often bat passes down at the line of scrimmage and would use his skills as a high jump champion to leapfrog blockers to get to the quarterback. Atkins was one of the first great exclusively defensive players in Pro Football and, along with fellow Hall of Famer Gino Marchetti, revolutionized the defensive end position.

Atkins began his playing career with the Cleveland Browns, but his peak years came with the Chicago Bears during his 17 year career. Atkins' first two seasons were played with the Cleveland Browns before being traded to the Chicago Bears in 1955. In Chicago Atkins quickly became a leader of a devastating defensive unit. With the Bears Atkins made All-Pro team in 1958, 1960, 1961, and 1963; along with being a starter in the Pro Bowl in 8 of his last nine years with Chicago. Before the 1967 season Atkins requested a trade, and he was traded to New Orleans with whom he would end his career in 1969.