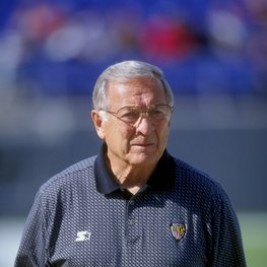 If your goal is to hire Ted Marchibroda to be your next keynote speaker or to be the next brand ambassador our celebrity speakers bureau can assist. If Ted Marchibroda’s booking fee is outside your companies budget or your unable to align with his appearance availability, our booking agents can provide you a list of talent that aligns with your event theme, budget and event date.

Ted Marchibroda is a former American football quarterback and head coach in the National Football League.

He began his coaching career in 1961 as an assistant for the Washington Redskins before joining the Los Angeles Rams in 1966. He then served as offensive coordinator under George Allen for the Washington Redskins He got his first head coaching job for the Baltimore Colts in 1975. In his first year there he turned the Colts into an instant playoff contender as they won the AFC East title. The Colts would win the AFC East title the next 2 seasons, led by 1976 NFL MVP Bert Jones and sensational running back Lydell Mitchell. But in those 3 playoff seasons the Colts would lose in the AFC Divisional Playoffs including a heartbreaking 37-31 loss to the Oakland Raiders in the 1977 postseason. He stayed as coach until 1979 and also served as coach of the Indianapolis Colts from 1992 to 1995. He was the offensive coordinator of the Buffalo Bills under head coach Marv Levy from 1989 to 1991. As the offensive coordinator for the Buffalo Bills, he was influential in the evolution of the hurry-up offense. Levy, Marchibroda and QB Jim Kelly used their version of the hurry-up offense, the "K-Gun" offense, to a greater extent than any previous offense. Kelly hurried to the line of scrimmage, preventing the defense from making substitutions, and called audibles at the line. The National Football League would later impose a rule that forced offenses to allow time for the defense to make substitutions if the offense made substitutions. He coached the Baltimore Ravens from 1996 to 1998, making him the only man to serve as head coach for both Baltimore NFL teams. He compiled a career record of 87–98–1, with a 2–4 record in the playoffs.