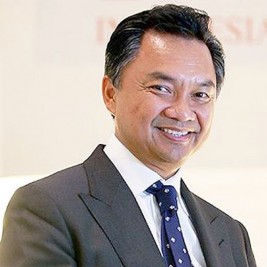 If your goal is to hire Dino Patti Djalal to be your next keynote speaker or to be the next brand ambassador our celebrity speakers bureau can assist. If Dino Patti Djalal’s booking fee is outside your companies budget or your unable to align with his appearance availability, our booking agents can provide you a list of talent that aligns with your event theme, budget and event date.

Dino Patti Djalal was born in Belgrade, Yugoslavia on 10th September 1965 into an Indonesian diplomatic family.  As son of diplomat, he lived in Jakarta, Yugoslavia, Guinea, Singapore, Washington DC, New York, Ottawa, Vancouver.  As a diplomat, he was posted to London, Dili, Washington DC.

Dino Patti Djalal joined Indonesia's Department of Foreign Affairs in 1987.  He quickly rose through the ranks, with postings in London, Dili and Washington DC.  In 2002, he was appointed Director for North American Affairs.  In 2004, when President Susilo Bambang Yudhoyono began his term, Dino was appointed Special Staff of the President for International Affairs.  In that capacity, Dino assumed many roles : Presidential spokesperson, foreign policy adviser to the President, speech writer.  Dino kept this job for 6 years until 2010, making him the longest serving Presidential spokesperson in Indonesia's modern history.

From 2010 to 2013, Dino served as Indonesia's ambassador to the United States, where he succeeded in elevating bilateral relations to a Comprehensive Partnership.

In early 2014, Dino joined the Convention of the then ruling party Partai Demokrat to select a Presidential candidate.  Dino campaigned as an independent and was not a party member of Partai Demokrat.

In June 2014, Dino was appointed Vice Minister for Foreign Affairs, until October that year.
In 2012, Dr. Dino won the prestigious "Marketeer of the Year", an award that was won by President Joko Widodo when he served as mayor of Solo.  In 2010, Dr. Dino received Bintang Jasa Utama, the state's second highest order of merit; and in 2014, he received Bintang Mahaputra Adiprana, the state's highest medal for meritorious service.

Dr. Dino has authored 9 books.  Most well known is "Harus Bisa", a book about leadership, which became a national best seller in Indonesia with some 2 million copies sold, and translated into English, Mandarin, Korean, Russian, French, Arabic, Japanese.

Dr. Dino is a Guinness World Record Holder for the largest angklung ensemble, which he organized in 2011 at the National Monument in Washington DC.  With over 250,000 followers, Dr. Dino has been called "the twitter ambassador".

Dr. Dino is married to Rosa Rai Djalal and they are blessed with 3 children.  They live in Jakarta, Indonesia.