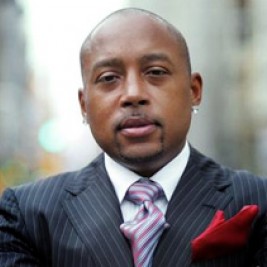 Businesses, Non-profit organizations, event planners and companies across the country have worked closely with our booking agents to hire Daymond John for a speaking engagements, guest appearances, product endorsements and corporate events. Many of those same clients have continued to turn to our speakers bureau as we can easily align Daymond John’s availability with their upcoming seminar, gala, annual conference, corporate function, and grand opening. Our close relationship with Daymond John’s booking agent and management team further enables us to provide inquiring clients with Daymond John’s speaking fee and appearance cost.

If your goal is to hire Daymond John to be your next keynote speaker or to be the next brand ambassador our celebrity speakers bureau can assist. If Daymond John’s booking fee is outside your companies budget or your unable to align with his appearance availability, our booking agents can provide you a list of talent that aligns with your event theme, budget and event date.

Daymond John's creative vision helped revolutionize the sportswear industry in the 1990s. As founder, president and chief executive officer of FUBU--"For Us, By Us"--John created a distinctive line of jerseys, jeans, outerwear, and a host of other related gear and accessories with a decidedly urban style to them. FUBU's phenomenal success has made mainstream apparel companies realize the potential for fashionable sportswear that appeals not just to trendsetting urban youth, but to copycat mainstream teens as well.

John was born in the New York City borough of Brooklyn, but spent his childhood in the Hollis neighborhood of Queens during the 1970s. Hollis would prove a ground-zero force in hip-hop culture, not just related to John's future fashion ideas but also as home to several future urban music pioneers--Run D.M.C, Salt 'n' Pepa, and L.L. Cool J among them. An only child, John grew up in a single-parent household headed by his mother Margot, who was a flight attendant for American Airlines, but often held more than one job at a time. "I owe my success to my mom, who instilled in me the fact that I could do anything I wanted to do," John told People magazine in 1997.

A self-described entrepreneur, John began earning money in the first grade by selling pencils to his classmates. Other youthful endeavors further honed his keen sales skills. He began his own delivery company for a time while working at a Red Lobster seafood restaurant, and drove a gypsy cab at one point as well. His first foray into the apparel market came when he wanted a tie-top hat and was put off by the price. "I found one and it was like $20," John told People magazine in 1997. "For a couple of pieces of cloth? And the sewing looked so easy. I said, 'For $20, I could make 20 of these a day.'"

John asked his mother to teach him how to use a sewing machine, and he began making the distinctive wool hats in the morning, and then selling them on the streets of Queens in the evening hours. One day in 1992, he and his friend sold $800 worth of hats, and realized their ideas had definite potential. They created a distinctive logo, and began sewing the "For Us, By Us" logo on hockey jerseys, sweatshirts, and t-shirts. John lured some longtime friends into the business: Carl Brown had been a friend since kindergarten, while ties with Keith Perrin and J. Alexander Martin stretched back several years as well. The partners then recruited another old neighborhood friend, L.L. Cool J., to wear a t-shirt in a photograph for a FUBU promotional campaign in 1993. As John told Sales and Marketing Management writer Michele Marchetti, their gear was not initially an easy sell to the rapper. "The first time he didn't like them, but each time we came back with a better design."

John's mother also helped her son launch his company by mortgaging her house for the $100,000 in start-up capital. Even more amazingly, she then moved out so that the quartet could use it as a makeshift factory and office space. As a company, FUBU officially emerged in 1994, when John and his partners traveled to an industry trade show in Las Vegas. They could not afford a booth to display their wares, so they rented a room in a posh hotel and passed out invitations. This risky strategy worked. Buyers liked the distinctively cut, vibrantly colored FUBU gear, and John and his partners returned to Queens with orders for $300,000 worth of merchandise.

FUBU soon had a contract with the New York City-based department store chain Macy's, and began expanding their line to include jeans and outerwear. A deal with Korean electronics manufacturer Samsung allowed their designs to be manufactured and delivered on a massive scale. FUBU's urban style was catching on with a wider range of consumers, but the original inspiration for the designs always came from what kids on the street were wearing. "John says the company also found motivation in what the partners perceived as efforts by white-owned outdoor apparel brands like Timberland and North Face, popular with inner-city youths, to distance themselves from the customers who were making them street chic," wrote Leslie Kaufman in the New York Times. "Fubu's marketing played off a sense of shared resentment at being ignored."

Like other companies who initially began as African American-owned, African American-focused sportswear businesses--Karl Kani and Wu-Wear among them--FUBU struck a chord with mainstream teenagers across North America as well. It was fitting retribution for John, who had been told initially by more than one upscale store that "they didn't have black customers and that 'white kids wouldn't dare wear it,'" according to the Wall Street Journal's Leon W. Wynter. "With retailers ranging from Nordstrom's to small-town specialty chains, Mr. John concedes that 'Us' is a lot bigger than he once thought," remarked Wynter. Wynter and other industry analysts also noted that the appeal of such exclusive brand-name gear among teens was inversely related to the number of teens sporting the items. "The problem is that nothing destroys the urban buzz of a label quite so fast as having Westchester [an affluent suburb of New York City] clamor for it," explained the New York Times's Kaufman.

In 1996 FUBU began using L.L. Cool J. as a spokesperson, and the distinctive logo and gear was photographed on the likes of Sean "Puffy" Combs, Mariah Carey, Brandy, and Whitney Houston. One of the partners, Keith Perrin, is solely responsible for celebrity relations at the company's headquarters, which eventually moved out of Hollis and into the landmark Empire State Building. With the massive success of FUBU, John realized that expanding the company and keeping it fresh would mean a repositioning of its goals. He began dismissing the "urban" tag when it became too commonplace. "There's nothing urban about some of the other so-called urban brands out there," John told Women's Wear Daily writer Cynthia Redecker. "They might be able to hang a tag on their items, but they are sportswear lines that have decided to use 'urban' as their catchword."

John was CEO and president of a company that earned $350 million in revenues in 1998, placing it nearly in the same stratosphere as such designer sportswear labels as Donna Karan New York and Tommy Hilfiger. He signed a deal with the National Basketball Association (NBA) to make FUBU "NBA" gear, and launched a separate line of women's apparel called FUBU Ladies. Not surprisingly, he returns often to his old Queens neighborhood, and is known to personally drive a truckload of giveaway turkeys through Hollis's streets at Thanksgiving. Despite his incredible success, John remains humble. He told Sales and Marketing Management's Marchetti that the most cherished perk of financial success "is being able to eat out every night."