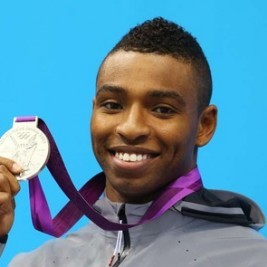 Businesses, Non-profit organizations, event planners and companies across the country have worked closely with our booking agents to hire Cullen Jones for a speaking engagements, guest appearances, product endorsements and corporate events. Many of those same clients have continued to turn to our speakers bureau as we can easily align Cullen Jones’s availability with their upcoming seminar, gala, annual conference, corporate function, and grand opening. Our close relationship with Cullen Jones’s booking agent and management team further enables us to provide inquiring clients with Cullen Jones’s speaking fee and appearance cost.

If your goal is to hire Cullen Jones to be your next keynote speaker or to be the next brand ambassador our celebrity speakers bureau can assist. If Cullen Jones’s booking fee is outside your companies budget or your unable to align with his appearance availability, our booking agents can provide you a list of talent that aligns with your event theme, budget and event date.

Jones attended North Carolina State University, where he was an English major and swam for the NC State Wolfpack swimming and diving team in National Collegiate Athletic Association (NCAA) competition from 2003 to 2006. He turned professional in the summer of 2006, after signing with Nike and burst onto the scene shortly after at the 2006 Pan Pacific Swimming Championships where he set a meet record in the 50-meter freestyle with a time of 21.84 seconds. He also swam a leg (split of 47.96) in the world record breaking 4×100-meter freestyle relay along with Michael Phelps, Jason Lezak and Garrett Weber-Gale. In 2007, he also won a gold medal in 4×100-meter freestyle relay with the same teammates in the 2007 World Aquatics Championships.

Jones is the second African-American to hold or share a world record (4×100-meter freestyle relay) in swimming after Anthony Ervin. He is also the third African-American to make the U.S. Olympic swimming team after Anthony Ervin and Maritza Correia. At the 2008 United States Olympic Trials, Jones broke the American record in the 50-meter freestyle with a time of 21.59. The record was subsequently broken the next day by Garrett Weber-Gale. In the 2008 Olympic Games in Beijing, he won a gold medal in the 4×100-meter freestyle relay in a world record time of 3:08.24 with Michael Phelps, Jason Lezak and Garrett Weber-Gale.

In July 2009, Jones set the American record in the 50-meter freestyle at the U.S. National Championships in Indianapolis, Indiana.