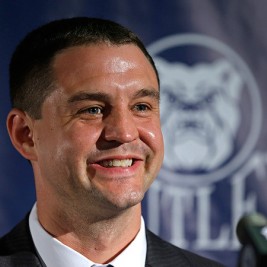 Businesses, Non-profit organizations, event planners and companies across the country have worked closely with our booking agents to hire Chris Holtmann for a speaking engagements, guest appearances, product endorsements and corporate events. Many of those same clients have continued to turn to our speakers bureau as we can easily align Chris Holtmann’s availability with their upcoming seminar, gala, annual conference, corporate function, and grand opening. Our close relationship with Chris Holtmann’s booking agent and management team further enables us to provide inquiring clients with Chris Holtmann’s speaking fee and appearance cost.

If your goal is to hire Chris Holtmann to be your next keynote speaker or to be the next brand ambassador our celebrity speakers bureau can assist. If Chris Holtmann’s booking fee is outside your companies budget or your unable to align with his appearance availability, our booking agents can provide you a list of talent that aligns with your event theme, budget and event date.

Chris Holtmann was born November 11, 1971 and is a basketball coach who is currently the head coach at Butler. Previously, he was the head coach of Gardner-Webb.

Holtmann grew up in Nicholasville, Kentucky before playing basketball at Taylor University. In 1994, his senior year, he earned All-America honors and Taylor hit number one in the National Association of Intercollegiate Athletics (NAIA) rankings. Holtmann got his start in coaching as a graduate assistant at Taylor in 1997. The next year, he became an assistant coach at Geneva College, then returned to his alma mater as an assistant in 1999.

Holtmann joined Gardner-Webb's staff in 2002 and spent the next five seasons there, first as an assistant coach and then as associate head coach. After two seasons as an assistant at Ohio, he returned the Gardner-Webb as head coach. At Gardner-Webb, he led a successful rebuilding effort culminating in the school's first Division I post season appearance in 2013. He was named conference and district coach of the year for his efforts.

In July 2013, Holtmann left Gardner-Webb to become an assistant coach at Butler. In October 2014, he took over the program as interim head coach when Brandon Miller requested a medical leave of absence from the university. On January 2, 2015, Holtmann was named the permanent head coach. He has a reputation of being a strong recruiter, signing multiple conference player of the year athletes, and as a defensive tactician.