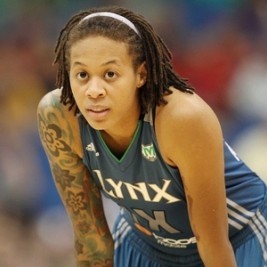 If your goal is to hire Seimone Augustus to be your next keynote speaker or to be the next brand ambassador our celebrity speakers bureau can assist. If Seimone Augustus’s booking fee is outside your companies budget or your unable to align with his appearance availability, our booking agents can provide you a list of talent that aligns with your event theme, budget and event date.

Seimone Augustus was born April 30, 1984 and is an American professional basketball player in the WNBA, currently playing for the Minnesota Lynx, Dynamo Kursk and the US national team.

Augustus was drafted #1 overall in 2006 WNBA Draft by the Minnesota Lynx. Selected as a reserve for the 2006 WNBA All Star Game at Madison Square Garden, Augustus led the West squad with 16 points and won the Skills Competition the previous evening.

Augustus finished her rookie campaign second to the Mercury's Diana Taurasi in scoring at 21.9 points per game. Only one player (Taurasi 2006), scored more points in a single season. In addition, she finished fifth in free throw percentage (.897). On August 20, Augustus was named the 2006 WNBA Rookie of the Year.

The former LSU star improved to 22.6 points per game in 2007, while shooting nearly 51% from the field. An All Star for the second straight year, Augustus finished second to Seattle's Lauren Jackson in scoring average and played in all 34 games. The Lynx however, finished 10-24 tied with Los Angeles Sparks for the league's worst record.

In June 2009, Seimone suffered a season ending injury, a torn ACL, against the Phoenix Mercury.

Augustus's return in 2010 was derailed by medical issues as well, as she was forced to undergo surgery to remove fibroid tumors, including one the size of a baby's head. Augustus had attempted to postpone surgery until after the season, but the pain was too difficult to play through. Despite the setback, Augustus returned to play the final 25 games of the season.

Augustus was finally back to full strength in 2011, and a part of a potent Lynx team that included newly acquired rookie Maya Moore. Augustus led the team in scoring and served as the team's lead defender as the Lynx rolled to the best record in the WNBA and team history. Augustus made her first all-star appearance since 2007, and led her team in scoring in three of the first four games of the playoffs. She finished eighth in MVP voting, and was named Second Team All-WNBA for the third time in her career, and the first since 2007.