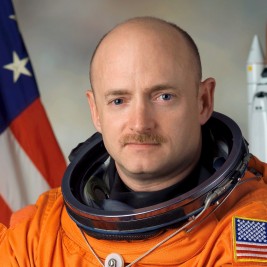 If your goal is to hire Captain Mark Kelly to be your next keynote speaker or to be the next brand ambassador our celebrity speakers bureau can assist. If Captain Mark Kelly’s booking fee is outside your companies budget or your unable to align with his appearance availability, our booking agents can provide you a list of talent that aligns with your event theme, budget and event date.

Mark Kelly is an American astronaut, retired US Navy Captain, best-selling author, and an experienced naval aviator who flew combat missions during the Gulf War. The winner of many awards, including the Legion of Merit, two Defense Superior Service Medals and two Distinguished Flying Crosses, Kelly was selected as an astronaut in 1996. He flew his first of four missions in 2001 aboard Space Shuttle Endeavour, the same space shuttle that he commanded on its final flight in May 2011. He has also commanded Space Shuttle Discovery and is one of only two individuals who have visited the International Space Station on four different occasions.

Already a celebrated American, Kelly became the center of international attention after the January 2011 assassination attempt on his wife, former US Congresswoman Gabrielle Giffords. In their best-selling memoir, Gabby, the couple share their story of hope and resilience. Their story captivated the nation in an exclusive Diane Sawyer interview, Nightline and The Daily Show, as well as on the covers of People and USA Today. Kelly was featured on the cover of Esquire and named one of the magazine's 2011 "Americans of the Year." Kelly has also written a children's book, Mousetronaut: A Partially True Story, about a little mouse chosen for a space mission, released in October 2012. In 2013, on the second anniversary of the Tucson shooting, Kelly and Giffords launched a political action committee aimed at curbing gun violence.

A sought-after keynote speaker, Mark Kelly is an American hero who inspires others to be their best while remaining true to their core values. He exemplifies leadership, the importance of teamwork, and courage under pressure.