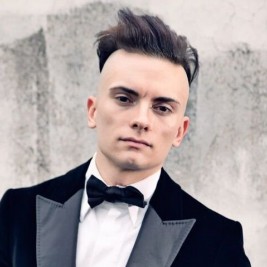 If your goal is to hire Cameron Carpenter to be your next keynote speaker or to be the next brand ambassador our celebrity speakers bureau can assist. If Cameron Carpenter’s booking fee is outside your companies budget or your unable to align with his appearance availability, our booking agents can provide you a list of talent that aligns with your event theme, budget and event date.

Cameron Carpenter is an American organist known for his virtuosity, showmanship, technique and arrangements for the organ.

Early in 2008, Telarc signed Carpenter to an exclusive five-album recording contract. His Telarc debut album, Revolutionary, was recorded as a CD and DVD at Trinity Church Wall Street in New York City,[5] and released September 23, 2008. The title comes from Carpenters transcription of Chopins Revolutionary Etude. The album made Carpenter the first organist ever to receive a Grammy nomination in the category Best Solo Instrumental Performance (without orchestra) for a solo album. His first commercial album was a 2006 CDDVD, Pictures at an Exhibition, on SeeMusicDVD. It includes his arrangement of the programmatic piano work by Modest Mussorgsky, and his own improvisatory New York City Sessions. Visuals for the Mussorgsky were created by Marshall Yaeger and his Kaleidoplex. The recording was made at Trinity Church, New York.

An early recording, made in 2005 and financed by the Allen Organ Company, was titled notes from the underground. This recording was a highly unusual project for Allen, as Carpenter was given near-complete artistic control of the album, selection of the program and even oversight of graphic design (featuring location shots of Carpenter at famous New York City graffiti sites). This album was not reissued by Allen and is now a rarity.
On June 1, 2010, Telarc issued in the U.S. Carpenters newest recording project, a two disc set with a CD carrying a J.S. Bach recital that had been recorded live at a recital he played in the Church of St. Mary the Virgin in New York City, and a DVD containing a full studio recital program with narration by Carpenter, as well as video clips from other live recital programs.