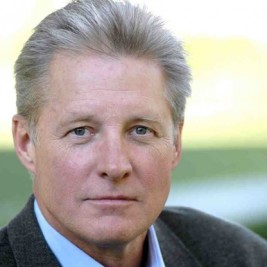 If your goal is to hire Bruce Boxleitner to be your next keynote speaker or to be the next brand ambassador our celebrity speakers bureau can assist. If Bruce Boxleitner’s booking fee is outside your companies budget or your unable to align with his appearance availability, our booking agents can provide you a list of talent that aligns with your event theme, budget and event date.

Bruce William Boxleitner is an American actor, and science fiction and suspense writer. He is known for his leading roles in the television series How the West Was Won, Bring 'Em Back Alive, Scarecrow and Mrs. King (with Kate Jackson), and Babylon 5 (as John Sheridan in seasons 2–5, 1994–1998). He is also known for his dual role as the characters Alan Bradley and Tron in the 1982 Walt Disney Pictures film Tron, a role which he reprised in the 2010 sequel, Tron: Legacy and the animated series Tron: Uprising.

Boxleitner was born in Elgin, Illinois, the son of a certified public accountant. He attended Prospect High School in Mount Prospect, Illinois, and the Goodman Theater School of Drama of the Art Institute of Chicago (later renamed The Theatre School at DePaul University).

He has made appearances in many other TV shows, such as The Mary Tyler Moore Show, Gunsmoke, Judith Krantz's Till We Meet Again, Tales from the Crypt, Touched by an Angel, The Outer Limits and She Spies, and in 1982, he played Chase Marshall in the TV film Bare Essence, with Genie Francis. He also was a member of the cast of Heroes for seasons three and four, playing New York Governor Robert Malden in three episodes. He also appears on the television series Chuck as the father of Devon Woodcomb.

He has also been in the made-for-television films The Secret, Hope Ranch, Falling in Love with the Girl Next Door, Pandemic, The Bone Eater, Sharpshooter and Aces 'n Eights.

Boxleitner was a guest-star on NCIS in the fall of 2010. He played Vice Admiral C. Clifford Chase, a high-ranking Navy official. Boxleitner also lends his voice to the animated version of his iconic character Tron in the animated series Tron: Uprising. The series premiered on Disney XD on June 7, 2012. He also reprises the character Alan Bradley/Tron from the films Tron and Tron: Legacy. He is currently appearing on GCB on ABC as Burl Lourd, Gigi's, Annie Potts, love interest.

He has also appeared in several films, including Tron (in which he played the title role) and The Baltimore Bullet (1980) with James Coburn. He reprised his role in the Tron sequel Tron: Legacy and in the video game Tron: Evolution which was released alongside the film Tron: Legacy, as he did for sequel video game named Tron 2.0, and Disney/Square Enix crossover video game Kingdom Hearts II. Boxleitner also voice as Col. John Konrad in video game Spec Ops: The Line. He also starred as Confederate General James Longstreet in the 2003 film Gods and Generals. He provides the voice of Colin Barrow in the animated science fiction horror film Dead Space: Downfall, based on the video game Dead Space. Other films he has been in include Kuffs, The Babe, Brilliant, Snakehead Terror, Legion of the Dead, King of the Lost World, Shadows in Paradise and Transmorphers: Fall of Man. In 2011 he officially announced that he will reprise his role as Alan Bradley/ Tron in Tron 3 in 2013.