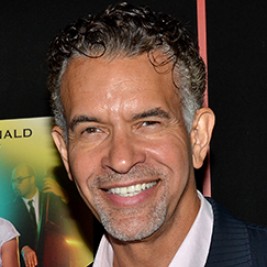 If your goal is to hire Brian Stokes Mitchell to be your next keynote speaker or to be the next brand ambassador our celebrity speakers bureau can assist. If Brian Stokes Mitchell’s booking fee is outside your companies budget or your unable to align with his appearance availability, our booking agents can provide you a list of talent that aligns with your event theme, budget and event date.

Dubbed “The Last Leading Man” by the New York Times, Brian Stokes Mitchell has enjoyed a rich and varied career on Broadway, television and film, along with appearances in the great American concert halls.

His musical versatility has kept him in demand by some of the country’s finest conductors and orchestras. He has performed selections from “Porgy and Bess” with Michael Tilson Thomas and the San Francisco Symphony at Carnegie Hall; Performed works by Aaron Copland and various contemporary composers at the Hollywood Bowl with the L.A. Philharmonic under the batons of Leonard and John Mauceri; Broadway tunes at Carnegie Hall and the Kennedy Center in Washington DC under the baton of the late Marvin Hamlisch (most recently at the National Symphony Orchestra’s 75th season Pops concert debut), and Jazz and standards with Maestro John Williams at Disney Hall and with the Boston Pops. He debuted Pulitzer prize-winning composer David Del Tredici’s “Rip Van Winkle” with the National Symphony Orchestra under the baton of Leonard Slatkin. He has been invited to the White House and has performed for Presidents Carter, Clinton and Obama.

He reprised his Tanglewood performance in John Williams’ Jazz version of “My Fair Lady” at Disney Hall singing opposite Dianne Reeves. In 2005 he made his cabaret debut as both singer and musical arranger in New York at Feinstein’s at the Regency in his critically acclaimed one-man show “Love/Life” which then moved to the Vivian Beaumont Theater at Lincoln Center. He received both the New York Bistro and Nightlife awards for his cabaret debut. He returned there in November of 2008 with a critically acclaimed concert where he was accompanied by a guitarist, a bassist and a percussionist. He headlined the Carnegie Hall concert presentation of Rodgers and Hammerstein's “South Pacific” with Reba McEntire, which aired on PBS in the Spring of 2006. It was also released on DVD and CD . He reprised his role along with Reba McEntire in July of 2007 at the Hollywood bowl then returned to The Hollywood bowl in August of 2008 starring as Javert in Les Miserables.

In 2011, Stokes returned to Broadway after a 7-year absence to do concerts, film and TV and spend some family time with his young son. The show was Lincoln Center Theatre’s production of “Women on the Verge of a Nervous Breakdown” which also starred Patti LuPone. Based on the Pedro Almodovar film of the same name, Stokes played the philandering Ivan. The cast album was released the same year.

At Encores he has starred in “Do, Re, Mi” and “Carnival” most recently starring in “Kismet.” In 1998 he joined the likes of Helen Hayes, Sir John Gielgud, Alec Guinness and James Earl Jones when he became the sole recipient of that year’s Distinguished Performance Award from the Drama League, the nation’s oldest theatrical honor, for his performance in “Ragtime.”

His long television career began with a seven year stint on “Trapper John, MD.” Numerous film and TV appearances more recently include “One Last Thing” which debuted at this year’s Toronto Film Festival, recurring roles on “Crossing Jordan” and “Frasier,” PBS’ “Great Performances,” DreamWorks’ “The Prince of Egypt” (singing “Through Heaven’s Eyes”), and his “Presidential Debut” in “The Singer and the Song” from the White House.

In May of 2011, Stokes appeared in the film “Jumping The Broom” playing opposite Angela Bassett for the 2nd time (The first being “Ruby’s Bucket of Blood” for Showtime). Stokes played Mr. Watson, the well-to do father of the bride.

Stokes has continued to stay active in the recording world as well. He has appeared on more than 20 albums as a cast member or special guest. In 2006 he released his self-titled album as the inaugural artist on the newly-formed Playbill Records label. In addition to singing, Stokes produced the album and also wrote many of the arrangements and orchestrations. It was mixed by 15 -time Grammy winner Al Schmitt and the liner notes were penned by John Williams.

In late 2012, Stokes released his Sophomore album “Simply Broadway.” Inspired by classic piano/vocal albums of the American Songbook, Stokes decided to use this same simple approach using songs from the Broadway Cannon. Stokes and his pianist, Tedd Firth, coarranged and recorded 25 songs, 12 of which made it onto “Simply Broadway” (a release of the other songs is sure to follow). The recordings were made in the “old style” - singer and pianist recording together in the same room at the same time without overdubs.

USA today picked “Simply Broadway” as one of the “Best albums of 2013” and Stokes continues to tour his concert version of that album. Simply Broadway is available on iTunes, Amazon ad CD Baby.

In Late 2013, Stokes put together a brand new Christmas Concert that was performed in Denver with the Colorado Symphony, The Kennedy Center with the NSO and at Lincoln Center with the New York Philharmonic. Stokes and Tedd Firth created delightfully creative new arrangements of various Holiday classics and Stokes arranged and orchestrated 2 of the songs himself. He also wrote and performed a new Christmas song called “Christmas Is All About” that was debuted at these concerts.

In 2014 Stokes continues to tour all over the United States with “Simply Broadway” and various other concerts. In May, he will be performing as King Arthur in a one -night-only Gala concert at the Kennedy Center in “Camelot.” That will be followed with his “Shakespeare in the Park” debut as Don Pedro in “Much Ado About Nothing” in Central park, directed by Jack O’Brien. For the 2014 holiday season, Stokes will be touring with the Cincinnati Symphony Orchestra under the baton of John Morris Russel once again performing Holiday favorites at various cities across the US.

As a writer Stokes was a contributor to the book “Hirschfeld’s Harlem,” wrote the preface to “At This Theatre,” and was a co-author of “Lights on Broadway with Brian Stokes Mitchell.”

For fun he has been known to fly planes and jump out of them, and can ride a bicycle on a high wire.

Stokes has enjoyed working with numerous charitable organizations from the March of Dimes to the USO, most recently participating in a concert, CD and DVD that raised money for the community of Sandy Hook, NY after their terrible tragedy.

He is in his 10th term as Chairman of the Board of the Actors’ Fund (www.actorsfund.org). Stokes resides in New York City with his wife, son and rescued mutt, Diggidy.