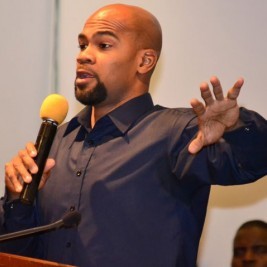 If your goal is to hire Antwaan Randle El to be your next keynote speaker or to be the next brand ambassador our celebrity speakers bureau can assist. If Antwaan Randle El’s booking fee is outside your companies budget or your unable to align with his appearance availability, our booking agents can provide you a list of talent that aligns with your event theme, budget and event date.

Antwaan Randle El was born August 17, 1979 and is a former American football wide receiver. He attended Indiana University where he primarily played college football for the Indiana Hoosiers, but he played basketball and baseball as well. He is currently the sideline reporter for the Big Ten Network for interconference games that the Indiana football team play. Following four years at Indiana, Randle El was drafted in the second round (62nd overall) of the 2002 NFL Draft, by the Pittsburgh Steelers. Playing with the Steelers for four seasons, he was active in all 64 regular season games with 23 starts, finding success as a wide receiver, kick returner and punt returner. He was also instrumental in a number of trick plays, including throwing a touchdown pass as a wide receiver for the Steelers in Super Bowl XL, the only wide receiver in Super Bowl history to do so. After the 2005 NFL season, Randle El was signed as a free agent to the Washington Redskins. As a receiver for the Redskins, he scored ten touchdowns, catching eight and throwing two. In 2007, Randle El was sidelined for a game against the Buffalo Bills with a hamstring injury, to date being his only inactive game. Randle El was released by the Redskins in March 2010, re-signing with the Pittsburgh Steelers shortly after. Randle El was also named fifth in USA Today's All-Decade kick returners. Randle El has a career passer rating of 156.1, the highest of any player with more than twenty completed passes.