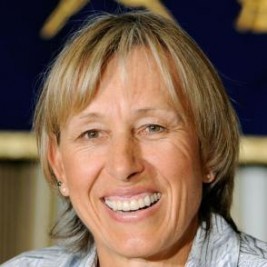 If your goal is to hire Martina Navratilova to be your next keynote speaker or to be the next brand ambassador our celebrity speakers bureau can assist. If Martina Navratilova’s booking fee is outside your companies budget or your unable to align with his appearance availability, our booking agents can provide you a list of talent that aligns with your event theme, budget and event date.

She set a new record with nine Wimbledon championships and more singles matches than anyone in tennis history with a 1,438-212 won-lost record. She holds 165 doubles titles and earned more than $20 million in prize money.

Martina was No. 1 in the world in 1978-79-80-82-83-84-85-86-87, for a total of 223 weeks. She won 18 Grand Slam Singles titles including her record 9 Wimbledon crowns, 4 US Opens, 3 Australian Opens and 2 French Opens. She and Chris are tied for 4th on the all-time list for Grand Slam singles titles. Martina is second on the all-time list with a total of 56 Grand Slam championships including 18 singles, 31 doubles and 7 mixed doubles titles. In 1984, she completed a non-calendar year Grand Slam by winning the 1983 Wimbledon, US Open and Australian Open and then the 1984 French Open. She captured the rare Triple Crown at the 1987 US Open, winning mixed doubles with Emilio Sanchez, women's doubles with Pam Shriver, and the singles title defeating Steffi Graf in the final. Billie Jean King and Margaret Court are the only other women who have accomplished this feat.

Martina and Chris provided the main story line for women's tennis for many years with their friendly rivalry that spanned more than 17 years, making it the longest and greatest ever in women's tennis, as well as the greatest individual rivalry in all sports. From 1973 through 1988, they played 80 matches, with Martina leading 43-37.

Martina was born in Prague, Czechoslovakia and became a US citizen in 1981, after seeking political asylum six years earlier. For years, she was considered such a non-person in her native land that both her name and photos were erased from record books throughout the then-Eastern Bloc country. In 1986 she returned to her homeland as a US citizen and led the US to a Federation Cup victory, just as she had done 11 years before for Czechoslovakia.

Martina was named by ESPN as one of the "20 Greatest Athletes of the Century", one of only two women on that list.

Martina was inducted into the International Tennis Hall of Fame in July, 2000.