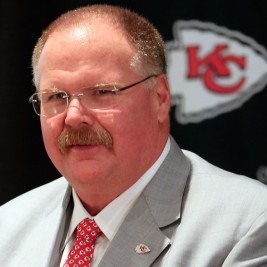 Businesses, Non-profit organizations, event planners and companies across the country have worked closely with our booking agents to hire Andy Reid for a speaking engagements, guest appearances, product endorsements and corporate events. Many of those same clients have continued to turn to our speakers bureau as we can easily align Andy Reid’s availability with their upcoming seminar, gala, annual conference, corporate function, and grand opening. Our close relationship with Andy Reid’s booking agent and management team further enables us to provide inquiring clients with Andy Reid’s speaking fee and appearance cost.

If your goal is to hire Andy Reid to be your next keynote speaker or to be the next brand ambassador our celebrity speakers bureau can assist. If Andy Reid’s booking fee is outside your companies budget or your unable to align with his appearance availability, our booking agents can provide you a list of talent that aligns with your event theme, budget and event date.

Andy Reid led the Philadelphia Eagles to 4 consecutive NFC Conference championships games, and a Super Bowl berth on the fourth one. His is currently the head coach of the Kansas City Chiefs.

Reid started his coaching career at Brigham Young University. After graduating from that college in 1981, he spent one year employed as a graduate assistant on the school's football coaching staff.

He spent the next nine years as an offensive line coach with four different colleges before being hired as an assistant coach by the Green Bay Packers in 1992.

In 2000, the Eagles reached the playoffs after an 11-5 regular-season finish.

Beginning in 2001, Reid's Eagles won the National Football Conference's Eastern Division four consecutive times, the longest such streak in franchise history, and advanced to the conference championship game in 2001, 2002, 2003, and 2004 losing this game on the first three occasions.

The 2003 team became the first in NFL history ever to qualify for postseason play after opening the season with two losses, both at home, in a non-strike year, and was also the first NFL team ever to reach the conference title round of the playoffs after having been shut out at home on opening day.

The 2004 team was the first NFC East squad to defeat all of its division rivals (New York Giants, Dallas Cowboys, and Washington Redskins) twice in the same season.

The Eagles made it to Super Bowl XXXIX but fell to the New England Patriots 24-21 in the final minutes.