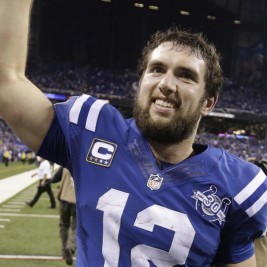 Businesses, Non-profit organizations, event planners and companies across the country have worked closely with our booking agents to hire Andrew Luck for a speaking engagements, guest appearances, product endorsements and corporate events. Many of those same clients have continued to turn to our speakers bureau as we can easily align Andrew Luck’s availability with their upcoming seminar, gala, annual conference, corporate function, and grand opening. Our close relationship with Andrew Luck’s booking agent and management team further enables us to provide inquiring clients with Andrew Luck’s speaking fee and appearance cost.

If your goal is to hire Andrew Luck to be your next keynote speaker or to be the next brand ambassador our celebrity speakers bureau can assist. If Andrew Luck’s booking fee is outside your companies budget or your unable to align with his appearance availability, our booking agents can provide you a list of talent that aligns with your event theme, budget and event date.

Andrew Luck was born September 12, 1989 and is a quarterback for the Indianapolis Colts of the National Football League (NFL). He played college football for Stanford University, won the Maxwell Award and Walter Camp Award as college football's player of the year, and was recognized as an All-American. He was the runner-up for the Heisman Trophy in both 2010 and 2011. He was named the Offensive Player of the Year in the Pac-12 (Pac-10) Conference in both 2010 and 2011. CBS Sports draft analyst Rob Rang called Luck the best prospect he has ever scouted, while the Kansas City Star put him in line with LeBron James and Bryce Harper as "the most hyped amateurs in recent sports memory". Although widely projected as the No. 1 selection in the 2011 NFL Draft, Luck decided to return to Stanford for his redshirt junior season. A year later, he was selected first overall in the 2012 NFL Draft.

In his regular season debut, Luck threw his first career interception to Chicago Bears cornerback Tim Jennings. He would later throw his first career touchdown pass to Donnie Avery. Ultimately, Luck completed 23 of 45 passes for 309 yards, a touchdown and three interceptions, as the Colts lost 41-21. The next week against the Minnesota Vikings, Luck threw for 224 yards and two touchdowns with no interceptions. Additionally, Luck got his first career win in the NFL and did this by completing his first game winning drive of his professional career. Before a week 5 showdown with the Green Bay Packers and reigning MVP Aaron Rodgers, Colts head coach Chuck Pagano was diagnosed with leukemia and had to take a leave of absence. Rallying the team for their coach (a movement that become known as "CHUCKSTRONG") Luck completed his second career game winning drive by throwing a touchdown to Reggie Wayne with 35 seconds left to pull off the stunning upset. Luck's then career-best 362-yard passing effort set a new rookie QB mark in Colts franchise history. The 18-point comeback also was the best by a rookie quarterback since Matthew Stafford, the first pick in the 2009 NFL Draft, led a 21-point rally for the Lions vs. the Browns in 2009. Luck completed 31 of 55 for 362 yards and three total touchdowns (2 passing, 1 rushing). Luck won his first career road and overtime game during a week 8 game against the division rival Tennessee Titans. A touchdown pass to running back Vick Ballard on the first drive of overtime gave the Colts a 19-13 victory. In a week 9 win against the Miami Dolphins, Luck threw for 433 yards, a new record for most yards in a game by a rookie QB (surpassing Cam Newton's 432 against the Green Bay Packers in 2011). Luck later sent his jersey from the Dolphins game to the Pro Football Hall of Fame. Through Week 9, Luck had thrown for the same number of yards as his predecessor, Peyton Manning. In Week 13 against the Detroit Lions, Luck and the Colts were trailing 33-28 with 1:07 left. He was able to get Indianapolis to the Lions' 14 yard line and faced a 4th down with :03 left. Luck then threw a screen pass to Donnie Avery who got free and ran in for the winning score, marking a big moment in Luck's early career. The win gave Luck his eighth on the season - the most wins by a rookie quarterback drafted first overall in NFL history, as well as his fifth game-winning drive on the season, tying Vince Young and Ben Roethlisberger for the most by a rookie quarterback.

On December 23, 2012, Luck broke the record for most passing yards by a rookie against the Kansas City Chiefs, throwing 205 to bring his season total to 4,183. Cam Newton held the previous record with 4,051 yards.