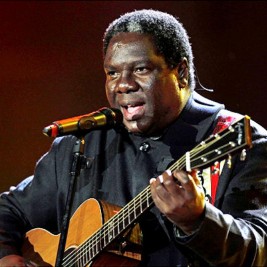 Businesses, Non-profit organizations, event planners and companies across the country have worked closely with our booking agents to hire Vusi Mahlasela for a speaking engagements, guest appearances, product endorsements and corporate events. Many of those same clients have continued to turn to our speakers bureau as we can easily align Vusi Mahlasela’s availability with their upcoming seminar, gala, annual conference, corporate function, and grand opening. Our close relationship with Vusi Mahlasela’s booking agent and management team further enables us to provide inquiring clients with Vusi Mahlasela’s speaking fee and appearance cost.

If your goal is to hire Vusi Mahlasela to be your next keynote speaker or to be the next brand ambassador our celebrity speakers bureau can assist. If Vusi Mahlasela’s booking fee is outside your companies budget or your unable to align with his appearance availability, our booking agents can provide you a list of talent that aligns with your event theme, budget and event date.

Vusi Mahlasela is simply known as ‘The Voice' in his home country, South Africa, celebrated for his distinct, powerful voice and his poetic, optimistic lyrics. His new album Say Africa is full of songs of freedom, of revolution, of love and of life. Raised in the Mamelodi Township, where he still resides, Vusi became a singer-songwriter and poet-activist at an early age teaching himself how to play guitar and later joining the Congress of South African Writers. After his popular debut on BMG Africa, When You Come Back, Vusi was asked to perform at Mandela's inauguration in 1994 and continues to spread Mandela's message as an official ambassador to Mandela's HIV/AIDS initiative, 46664. After worldwide touring and international acclaim, Americans first caught a glimpse of Vusi in the lauded documentary film Amandla! A Revolution in Four-Part Harmony, and the accompanying soundtrack. After the release of the film, long-time admirer and fellow South African, Dave Matthews, signed Vusi to his own ATO Records label and released The Voice (2003)¸ a collection of the best songs from Vusi's catalog. In 2007, ATO released Guiding Star, his first full-length release in the States. ATO Records released the highly anticipated follow-up record to Guiding Star on January 18, 2011. The new album, Say Africa, produced by Taj Mahal and recorded at Dave Matthews Band's studio in Charlottesville, VA, captures Vusi's hope for the future of Africa.