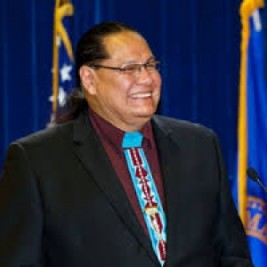 Businesses, Non-profit organizations, event planners and companies across the country have worked closely with our booking agents to hire Dennis Zotigh for a speaking engagements, guest appearances, product endorsements and corporate events. Many of those same clients have continued to turn to our speakers bureau as we can easily align Dennis Zotigh’s availability with their upcoming seminar, gala, annual conference, corporate function, and grand opening. Our close relationship with Dennis Zotigh’s booking agent and management team further enables us to provide inquiring clients with Dennis Zotigh’s speaking fee and appearance cost.

If your goal is to hire Dennis Zotigh to be your next keynote speaker or to be the next brand ambassador our celebrity speakers bureau can assist. If Dennis Zotigh’s booking fee is outside your companies budget or your unable to align with his appearance availability, our booking agents can provide you a list of talent that aligns with your event theme, budget and event date.

Dennis W. Zotigh is a Kiowa, San Juan Pueblo and Santee Dakota Indian and is a member of the Kiowa Gourd Clan, and a descendent of Sitting Bear and No Retreat, both principal war chiefs of the Kiowa.

Zotigh began singing and dancing at Native celebrations at a very young age. He grew up learning traditional values and has extended his capabilities as a cultural promoter by learning songs, dances and their significance from Indigenous nations across North America. With his wealth of knowledge, he has lectured at universities, museums, educational conferences and symposiums both domestically and internationally on topics concerning American Indian culture.

He is the director of the internationally known dance company, The Great American Indian Dancers. As a performer and lecturer, Zotigh has toured 49 states and 21 foreign countries. On March 4, 1999, under his direction, The Great American Indian Dancers were selected to perform for President Clinton at the 150th Anniversary of the Department of Interior in Washington, D.C. As both an Indian dancer and singer, he has competed and won numerous awards for his talents. He currently sings with the former world champion Indian singing group The Zotigh Singers. This popular singing group has hosted the singing for major powwows coast to coast and has produced five CDs under the Indian House, Sweet Grass and Cool Runnings recording labels.

In 1990, he and his father revived a historical art form by founding the "World's Championship Hoop Dance Contest," held annually at the Heard Museum in Phoenix, Arizona. He has been Master of Ceremonies for three consecutive years at the "Miss Indian World Competition," at the Gathering of Nations in Albuquerque, New Mexico in addition to serving various roles in numerous other Native American pageants, art events and powwows.

In 1991, he was commissioned to write a text encompassing American Indian dance titled, Moving History: The Evolution of the Powwow. It is permanently housed and distributed by Oklahoma City's Red Earth Center. This important piece of history has led to projects with: National Geographic Magazine, ABC and NBC Television, National Public Radio, The National Museum of the American Indian, The British Museum and numerous publications.

Zotigh truly seeks to preserve the past, to broaden how Native Americans are viewed in the present and to create new opportunities for Indian youth in the future.