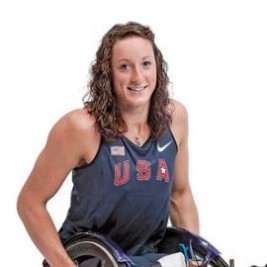 If your goal is to hire Tatyana McFadden to be your next keynote speaker or to be the next brand ambassador our celebrity speakers bureau can assist. If Tatyana McFadden’s booking fee is outside your companies budget or your unable to align with his appearance availability, our booking agents can provide you a list of talent that aligns with your event theme, budget and event date.

Tatyana McFadden was born in St. Petersburg, Russia, on April 21, 1989. She was born with spina bifida, a congenital disorder that paralyzed her from the waist down. Her birth mother abandoned her in an orphanage that was too poor to afford a wheelchair for her, so she walked on her hands for the first six years of her life. The doctors told her she was so sick that she had very little time to live. While in the orphanage, she met Deborah McFadden, who was visiting Russia as a commissioner of disabilities for the U.S. Health Department. Deborah, a single mother, adopted Tatyana and took her to live in Baltimore.

Until 2009, McFadden specialized in shorter distance sprints. She entered the Chicago Marathon in 2009 as a lark. Unexpectedly, she won, finishing so soon that her mother didn't have her camera ready to record the victory. That was the first of a series of marathon victories for her, including New York in 2010, Chicago in 2011 and London in 2011.

McFadden became the first athlete to win six gold medals at a championships during the 2013 IPC Athletics World Championships in Lyon. She claimed gold in every event from the 100 meters through to the 5,000 meters. McFadden also won the Boston, Chicago, London, and New York marathons in 2013. This made her the first person – able-bodied or otherwise – to win the four major marathons in the same year. She also set a new course record for the Chicago Marathon (1 hour, 42 minutes, 35 seconds).

McFadden began 2014 by returning to the country of her birth, Russia, to compete in the Winter Paralympic Games in Sochi. After winning silver medal in the 1km Sprint sitting cross-country skiing event; McFadden claimed she was "fulfilled" after winning the medal in front of all of her family including her biological mother. McFadden finished in 5th place in the Women's 12km. Just over a month after Sochi, McFadden returned to wheelchair racing at the London Marathon, where she successfully defended her title in a new course record time.

McFadden had difficulty competing at high school. Atholton High School would not allow her to race at the same time as able-bodied runners, with officials saying her racing chair created a safety hazard and gave her an unfair advantage (as the best wheelchair racers are noticeably faster than runners over long distances). She competed in separate wheelchair events at high school meets, meaning that she would circle around an otherwise empty track by herself, which embarrassed her. In 2005 Tatyana and Deborah McFadden filed suit against the Howard County Public School System and won the right for her to race at the same time as the runners starting in 2006, though her score would not be counted for her team.

McFadden's lawsuit is credited for the eventual passage of the Maryland Fitness and Athletics Equity for Students with Disabilities Act, requiring schools to give students with disabilities the opportunity to compete in interscholastic athletics.