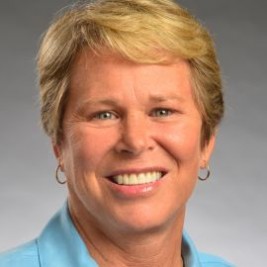 If your goal is to hire Ann Meyers Drysdale to be your next keynote speaker or to be the next brand ambassador our celebrity speakers bureau can assist. If Ann Meyers Drysdale’s booking fee is outside your companies budget or your unable to align with his appearance availability, our booking agents can provide you a list of talent that aligns with your event theme, budget and event date.

Ann Meyers made headlines when she became the first woman to sign an NBA contract. The team was the Indiana Pacers and Meyers went to training camp but failed to make the team cuts. Ann Meyers attended UCLA, as had her brother, Dave, who played for the men's basketball team, and later played in the NBA. She was a four-time basketball all-American at UCLA and also played two years of volleyball and track.

At a school known as the greatest basketball power ever, Ann Meyers scored more points in school history than any other player, male or female. In 1978 she won the Broderick Award both as the outstanding collegiate basketball player and the outstanding female athlete. Internationally, Meyers also had extensive experience. Besides the 1976 Olympics, she played on the 1975 Pan American Games (winning gold) and World Championships teams, 1977 Universiade team (winning silver), and the 1979 Pan American Games (winning silver) and World Championships teams (winning gold). She was also elected to carry the U.S. flag at the 1979 Pan-Am opening ceremonies.

In 1979-80 Ann Meyers played with the New Jersey Gems of the Women's Basketball League and was voted the league's co-MVP.

Meyers now serves as the Vice President of the Phoenix Suns.