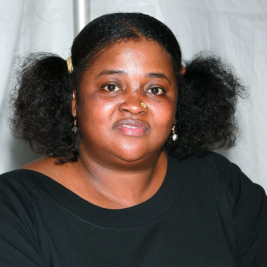 Businesses, Non-profit organizations, event planners and companies across the country have worked closely with our booking agents to hire Sister Souljah for a speaking engagements, guest appearances, product endorsements and corporate events. Many of those same clients have continued to turn to our speakers bureau as we can easily align Sister Souljah’s availability with their upcoming seminar, gala, annual conference, corporate function, and grand opening. Our close relationship with Sister Souljah’s booking agent and management team further enables us to provide inquiring clients with Sister Souljah’s speaking fee and appearance cost.

If your goal is to hire Sister Souljah to be your next keynote speaker or to be the next brand ambassador our celebrity speakers bureau can assist. If Sister Souljah’s booking fee is outside your companies budget or your unable to align with his appearance availability, our booking agents can provide you a list of talent that aligns with your event theme, budget and event date.

Born into poverty and raised on welfare Sister Souljah knew what it was like to be underprivileged. She decided at a very young age to overcome her situation but never forget the circumstances that brought her and many others in her community to this some point. As a student she was excellent but disliked what she was being taught in school. She felt that she was being taught very little of her history. So she took a very active and special interest in learning everything she could about African history. Which she felt was purposely left out of the education curriculum in this country. While in high school, she interned in the House of Representatives for the Republican Party.

Sister Souljah was also the recipient of several honors during her teenage years. She won the American Legion's Constitutional Oratory Contest, A scholarship to attend Cornell University's Advanced Summer Program, and a chance to study aboard in Spain at the University of Salamanca. All before the age of 18, after which she attended Rutgers's University and double-majored in American History and African Studies. She became a well-known and outspoken voice on campus and active writer for the school paper. In the mid 1980's, while attending college, Reverend Benjamin Chavis of the United Church of Christ Commission for Racial Justice offered her a job. She spent the next three years developing, organizing, and financing programs like a sleep away camp called the African Survival Camp, located in Enfield, North Carolina for homeless families. Throughout the 1990's Sister Souljah continued her commitment to social injustice but it began to take a controversial stance.

As a political activist, Sister Souljah became angered by the condition of African people thought the entire world. Her strong dedication and reputation for being opinionated about this subject tended to get her into trouble. One such incident occurred in 1992, when Candidate for President, Bill Clinton admonished Sister Souljah at a Rainbow Coalition event for comments she made on her rap album 360 Degrees of Power. However, Sister Souljah has preserved and stays an activist for the people always. She even added the title of author to her resume having published two books No Disrespect and the NY Times bestseller The Coldest Winter Ever.

She is also the executive director of Bad Boy Records CEO, Sean "Puffy" Combs, non-profit organization for kids called Daddy's House. The program serves over 600 kids from ages 6 to 16 from the inner city neighborhoods of New York, New Jersey, and Philadelphia. By providing them with educational and mentor opportunities. She was also one of the speakers at the 1997 Million Women March in Philadelphia. At the age of 36 Sister Souljah has come full circle and doesn't plan on turning back.