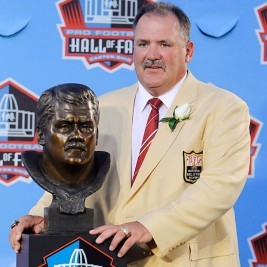 Businesses, Non-profit organizations, event planners and companies across the country have worked closely with our booking agents to hire Russ Grimm for a speaking engagements, guest appearances, product endorsements and corporate events. Many of those same clients have continued to turn to our speakers bureau as we can easily align Russ Grimm’s availability with their upcoming seminar, gala, annual conference, corporate function, and grand opening. Our close relationship with Russ Grimm’s booking agent and management team further enables us to provide inquiring clients with Russ Grimm’s speaking fee and appearance cost.

If your goal is to hire Russ Grimm to be your next keynote speaker or to be the next brand ambassador our celebrity speakers bureau can assist. If Russ Grimm’s booking fee is outside your companies budget or your unable to align with his appearance availability, our booking agents can provide you a list of talent that aligns with your event theme, budget and event date.

Russ Grimm was born May 2, 1959 in Scottdale, Pennsylvania and is a former American football Pro Bowl guard for the Washington Redskins of the National Football League. He was also an All-American center at the University of Pittsburgh Grimm played 11 seasons for the Redskins and was a first team selection to the NFL 1980s All-Decade Team. He is currently the assistant head coach and offensive line coach for the Arizona Cardinals.

He was drafted in the third round by the Redskins in the 1981 NFL Draft. Along with Jeff Bostic, Mark May, George Starke and Joe Jacoby, Russ Grimm was a founding member of the Redskins' renowned "Hogs" offensive line of the 1980s and early 1990s, which was a mainstay of the Redskins' glory years during the first Joe Gibbs era.

During his 11 seasons as the Redskins' starting guard, Russ Grimm helped lead his team to 4 Super Bowl appearances and 3 Super Bowl victories. Along the way, Grimm was selected to 4 consecutive Pro Bowl appearances. He was named an All-Pro in each of those years as well.

According to Mark May, a teammate both at Pittsburgh and on the Redskins, no one lived up to the "Hog" persona more than Grimm: "He was a blue collar stiff and proud of it." In his 2005 memoir, May recalled a Christmas party at his house in 1982: "I iced down a keg of beer and stationed it on the landing between the first floor and basement. Russ turned the landing into his headquarters for the evening. He grabbed a chair and a Hog shot glass and parked his butt on the landing next to the keg. Except for an occasional trip to the bathroom, we didn't see Russ on the first level all night..."

After hanging up his player's cleats, Grimm returned to the Redskins as a tight end coach from 1992 through 1996, and offensive line coach from 1997 through 2000, during which he was instrumental in the development of tackles Chris Samuels and Jon Jansen. After his coaching stint with the Redskins, Grimm joined the Pittsburgh Steelers as offensive line coach in September 2000. In 2004 he was promoted to Assistant Head Coach/Offensive Line.

In 2004, after the Chicago Bears fired Dick Jauron, Bears management considered Grimm as a top candidate for the job. The job eventually went to then St. Louis Rams defensive coordinator Lovie Smith.

In 2005, Grimm added another Super Bowl ring to his résumé as part of the Pittsburgh Steelers' coaching staff.Under Grimm guidance in 2005, the Super Bowl champion Steelers averaged nearly 140 yards rushing per game during the regular season to rank fifth in the NFL while also grinding out 181 rushing yards in their Super Bowl XL victory over the Seattle Seahawks. In 2006 Steelers offensive line helped pave the way for running back Willie Parker to gain 1,494 yards and 13 touchdowns on 337 carries with 4.4 yard avg. and earn his first Pro Bowl selection. Pittsburgh offense finished the 2006 season with the 10th best rushing attack in the NFL, helping to give the Steelers the 7th ranked total offense in the league. Parker finished the season with the second and third top rushing performances of the year in the NFL with 223 rushing yards 32 att., TD against Cleveland Browns and 213 yards with 22 att, 2 TD vs. New Orleans Saints.

On January 5, 2007, Bill Cowher resigned as head coach of the Steelers. In the press conference that followed, Steeler's President Art Rooney II announced Russ Grimm as one of the candidates for the job. He was named as a finalist for the job along with Ken Whisenhunt and Mike Tomlin. On January 22, 2007, the Steelers hired Tomlin as their head coach. The day after Tomlin's hiring, Grimm was hired to serve under Whisenhunt as the Arizona Cardinals assistant head coach/offensive line coach.

In his first season in Arizona, his offensive line allowed only 24 sacks, 6th best in the NFL and the fewest given up by the Cardinals since 1978 with 22. Grimm’s offensive line also paved the way for running back Edgerrin James to rush for 1,222 yards, the fifth best total in team history. The Cardinals offense finished with the 5th best passing attack in the NFL and threw for a team record 32 touchdowns. Grimm remained with the Cardinals until Whisenhunt and the entire offensive staff was fired in December 2012.